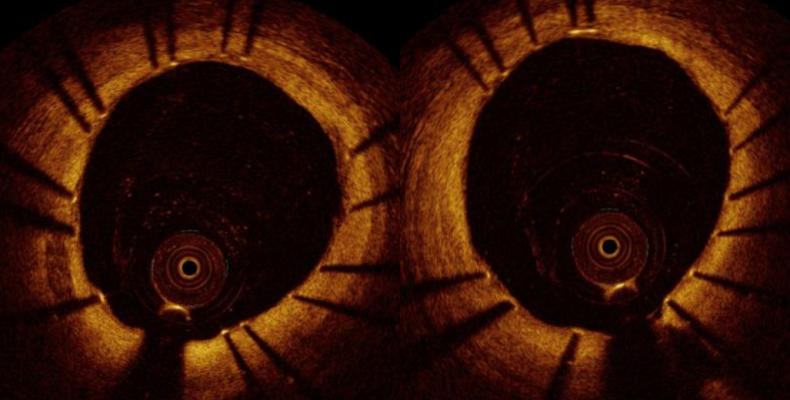 IVUS is an imaging modality used to assess lesion morphology during PCI, and several studies have reported that IVUS guidance in PCI might be helpful to improve outcomes. OFDI is the most recently developed optical coherence tomography (OCT) technology that uses light rather than ultrasound to give high-resolution imaging.

"The clinical outcome in both OCT-guided PCI and IVUS-guided PCI was excellent," reported Kubo. He suggested the study results contribute to defining the clinical value of OCT guidance in PCI. "Our results might influence the next ESC guidelines, which currently give a class IIb recommendation for OCT. OCT use during PCI should have a class IIa recommendation," he said.

Commenting on the findings, Takashi Akasaka, professor of medicine at Wakayama Medical University, Wakayama, Japan, said, "There has previously been no direct comparative data for OCT/OFDI-guided PCI and IVUS-guided PCI. The OPINION study succeeded in demonstrating that OCT-guided PCI resulted in equivalent clinical and angiographic outcomes at 12 months to IVUS-guided PCI."

Akasaka considers the clinical outcome with both imaging strategies was very good, with a low rate of target vessel revascularization, "thus, the OPINION study may contribute to define the clinical value of the OCT guidance in PCI." He agreed that the findings mean that OCT/OFDI-guided PCI should be given a class IIa recommendation.