ORBITA: FFR and iFR as Predictors Placebo-controlled Response to PCI 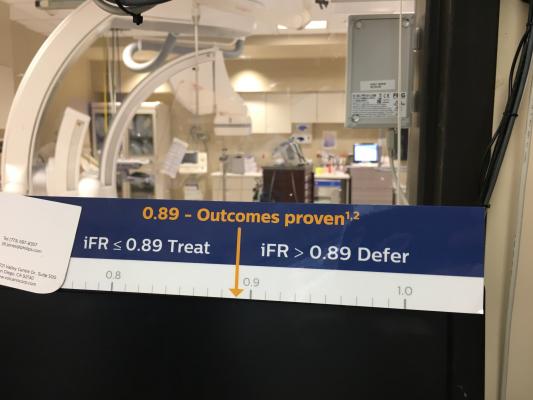 May 29, 2018 — The first placebo-controlled trial that looked at how fractional flow reserve (FFR) and instantaneous wave-free ratio (iFR) predicts the efficacy of percutaneous coronary intervention (PCI) found angioplasty improved ischemia. The invasive physiology data from 196 patients from the Objective Randomized Blinded Investigation with optimal medical Therapy of Angioplasty in stable angina (ORBITA) Trial was presented as a late-breaking trial at the 2018 EuroPCR conference.

“In particular, from this study, we’ve seen that the degree of ischemia on iFR and FFR entirely predicts the degree of improvement in ischemia that’s seen on dobutamine stress echo," said Rasha Al-Lamee, interventional cardiology consultant at Imperial College London and principal investigator for ORBITA. "What this means for physicians is that we will be able to use the iFR and FFR data before an intervention to predict exactly how much improvement in ischemia we can expect for our patients following successful stenting. This is the first placebo-controlled evidence we have had of this kind.”

FFR and iFR were used as predictors of placebo-controlled efficacy of PCI in stable coronary artery disease. Patients enrolled had stable angina and single vessel coronary artery disease. At pre-randomization the majority had Canadian Cardiovascular Society class II or III symptoms (150/196, 76.5%). Mean FFR and iFR were 0.69±0.16 and 0.76±0.22, respectively. 97% of patients had one or more positive noninvasive or invasive tests for ischemia.

FFR and iFR was performed solely for this research question, and so the interventionalist in the catheterization laboratory was blinded to the results. Assessment of response variables, treadmill exercise time, stress echo score, symptom frequency, and angina severity were performed at pre-randomization and blinded follow-up. Effects were calculated by analysis of covariance. The ability of FFR and iFR to predict placebo-controlled changes in response variables was tested using regression modeling.

This report of ORBITA stratified by invasive haemodynamic measures of stenosis severity provides the first placebo-controlled evidence of the association between FFR and iFR and the magnitude of benefit attributable to PCI.

"This is the first placebo-controlled trial looking at how invasive physiology predicts the efficacy of PCI," Said Al-Lamee. "In this publication and in the primary publication in The Lancet we saw that angioplasty improved ischemia as assessed by dobutamine stress echo. However, in this analysis we were also able to assess an additional secondary endpoint of freedom from angina.  What is most interesting is that we found that angioplasty increased the number of patients who were free of angina by 20 absolute percentage points. For physicians, this means that one in five patients that we treat with angioplasty vs. placebo will be more likely to be free from angina. For our patients, this is one of the most important things we can tell them, that they are more likely to become symptom free.”

He said the next step for ORBITA is to look at the degree to which stress echo itself predicts the placebo-controlled impact of PCI. “In order to build on some of the questions answered in ORBITA as well as being able to apply ORBITA to a wider patient base, we are also preparing for ORBITA 2 which will be a larger trial, with wider inclusion criteria for patients with stable angina,” Al-Lamee concluded.