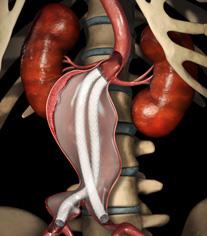 March 12, 2015 — St.Vincent Heart Center is first in Indiana and second in the nation to participate in a clinical study for the Nellix EndoVascular Aneurysm Sealing System (EVAS), a surgical procedure designed to repair an abdominal aortic aneurysm (AAA). Leading the clinical trial, sponsored by Endologix Inc., in Indiana is Sajjad Hussain, M.D., vascular surgeon with St.Vincent Medical Group at St.Vincent Heart Center.

Robert Bodish, 72-year-old Indianapolis resident, first learned of his abdominal aortic aneurysm after receiving a computed tomography (CT) scan for a different medical ailment. After his physicians continued to monitor the size of his aneurysm, it was determined in January that Bodish qualified to participate in the clinical trial. Having gone through open heart surgery in 2012, Bodish is grateful for the lifesaving procedure and has been pleasantly surprised as to how quickly he has recovered and been able to return to his daily routine.

AAA is an enlarged and weakened section, or “ballooning” of the aorta. Infrarenal AAA occurs below the renal arteries – blood vessels that lead to the kidneys – that are prone to rupture and often results in death.

The Nellix EVAS system is a new generation of AAA surgery designed to seal the entire aneurysm through two small incisions similar to the stent graft. However, the new concept in this device includes filling the space around the stents within the aneurysm with two bags filled with a solution that becomes a solid substance within a few minutes, thus preventing the risk of any blood from trickling back into the sac. The procedure is expected to significantly decrease the need for a secondary procedure in comparison with traditional surgery and other associated risks. Nellix is the first and only EVAS product that has been developed to simplify procedures, reduce re-interventions and expand the treatable patient population.

According to the Centers for Disease Control and Prevention, aortic aneurysms were the primary cause of more than 10,500 deaths and contributing cause in more than 17,200 deaths in the United States in 2009.