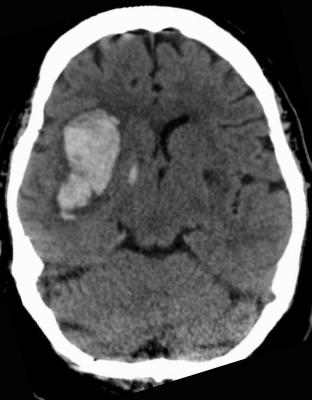 June 9, 2016 — An international stroke study found that standard and intensive blood pressure treatments were equally effective in the emergency treatment of acute intracerebral hemorrhage, a type of stroke caused by bleeding into the brain. Patients whose systolic blood pressure was reduced rapidly in emergency rooms to standard levels used to treat acute stroke (140-179 mm Hg) did as well as patients whose pressure was reduced to intensive levels (110-139 mm Hg).

The study, published in the New England Journal of Medicine, was funded by the NIH’s National Institute of Neurological Disorders and Stroke (NINDS).

Annually, more than 795,000 people in the United States have a stroke. Approximately 10 percent of strokes are caused by acute intracerebral hemorrhages. Chronic high blood pressure is the greatest risk factor for these types of strokes. Studies have shown that controlling blood pressure reduces the chances of having all types of strokes. Although this type of stroke is associated with higher rates of death or disability than the more common form caused by brain blood clots, there is a need for scientifically proven emergency treatments for hemorrhage strokes.

Elevated blood pressure is thought to contribute to growth of the hemorrhage, or the leak, and worse outcomes. Some studies have suggested that rapid, intensive blood pressure lowering may lead to better outcomes. Nonetheless, the ideal target blood pressure to minimize hemorrhage growth safely and effectively has not been established.

The Antihypertensive Treatment of Acute Cerebral Hemorrhage II (ATACH II) trial addressed this issue by randomly assigning 1,000 participants with elevated blood pressure following their stroke to either standard or intensive blood pressure treatments used for acute stroke. The participants, who on average were 62 years old, were treated within four and a half hours of a stroke at medical centers in the U.S., Japan, Taiwan, China, South Korea and Germany.

“Rapidly lowering blood pressure to normal levels may further damage the brain,” said Qureshi. “The levels we used are tolerable for emergencies. Normal levels can be safely obtained gradually.”

Brain scans taken 24 hours after treatment showed no difference in the rates of hemorrhage growth between the two groups. The results also showed that after 90 days the rate of death or severe disability was equal, about 38 percent, for either treatment. Patients in the intensive treatment group had a slightly higher rate of serious adverse events in the 90 days following the stroke.

The study was designed to enroll 1,280 patients; the researchers stopped the trial after analyzing data from the first 1,000 patients, however, because they saw no differences between the treatments.

The 90-day death and severe disability rates of this study were lower than those seen in other hemorrhagic stroke studies, 38 percent versus an expected rate of 60 percent. The researchers suggested that the difference may be due to including patients who had relatively minor strokes and therefore a better chance of good results. Initial patient examinations showed that over half had mild stroke as determined by the Glasgow Coma Scale. The researchers also suggested that, by participating in the trial, the patients received better overall care.

“Although additional studies are needed, we may have seen a global benefit of careful monitoring and standardized care for patients with acute cerebral hemorrhage,” said Qureshi.

This work was supported by grants from NIH (NS062091, NS071861) and the National Cerebral and Cardiovascular Center (Japan). Chiesi USA Inc. and Astellas Pharma Inc. supplied intravenous nicardipine for the study.