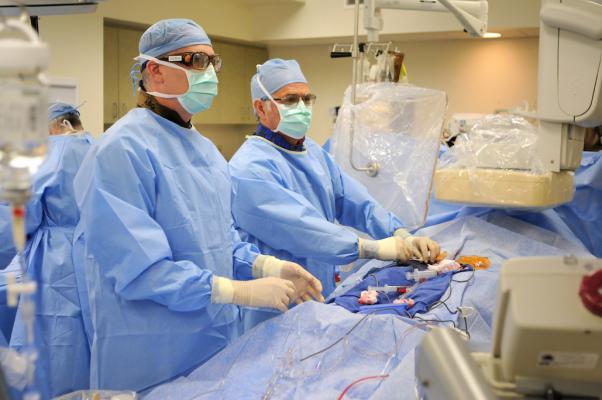 November 9, 2016 — A pioneering way to access the heart for transcatheter valve replacement has a 98 percent success rate, according to a study published in the Journal of the American College of Cardiology.

Watch a 2017 interview with Greenbaum in the VIDEO: Transcaval Access in TAVR Procedures.

The study, published this week online, reported a 98 percent success rate for the procedure in 100 patients in a multi-center trial. Greenbaum presented the results to interventional cardiologists gathered at the 28th annual Transcatheter Cardiovascular Therapeutics (TCT) scientific symposium, Oct. 29-Nov. 2 in Washington, D.C.

“There were some doubters, so the reason we did this prospective trial was to prove that it could be done safely,” Greenbaum said at the conference focused on catheter-based treatments. “The success of this approach offers a new route for heart valve patients who may be out of options.”

Robert Lederman, M.D., an interventional cardiologist at the National Heart, Lung, and Blood Institute, developed the transcaval technique in a research setting. He came to Henry Ford in July 2013 to observe the initial procedure and share his insights.

Since then, the procedure has been performed when the patients were either too sick for traditional open heart surgery, or their anatomy, like small arteries, prevented the use of more traditional routes to the heart using a catheter.

During transcaval valve replacement, a wire is guided into a leg and up through the femoral vein. An opening between the vein and artery is widened to the point of allowing a catheter to connect them, continue to the heart and implant the new artificial aortic heart valve.

As the catheter is removed, plugs are inserted in the artery and the vein to close the holes made for the temporary connection of the two major blood vessels. Greenbaum and the Center for Structural Heart Disease team at Henry Ford Hospital are the most experienced team performing the procedure in the United States.

“The milestone brings a message of hope for other potential patients in Michigan and across the country,” said O’Neill.

Approximately 5 million people in the United States are diagnosed with heart valve disease annually. With an aging population that is often too frail for open-heart surgery, more than 20,000 Americans die of the disease each year, according to the American Heart Association.