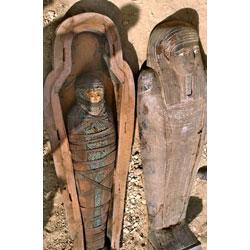 November 17, 2009 — The recent discovery of 3,500-year-old Egyptian mummies showing signs of hardening of the arteries indicates that heart disease is not just a condition found in modern humans as commonly believed.

A cardiologist at Saint Luke’s Mid America Heart Institute and his research colleagues from Cairo, Milwaukee and Mission Viejo, Calif., made the discovery. The research appears in the November 18th issue of the Journal of the American Medical Association.

Randall Thompson, M.D., a cardiologist at Saint Luke’s, and collaborating imaging experts, Egyptologists and preservationists, examined direct evidence collected using a Siemens six-slice computed X-ray tomography on 22 mummies in the Museum of Antiquities in Cairo, Egypt. The mummies dated from 1981 B.C. to 364 A.D. All were of high social status, including priests and members of the pharaoh’s household.

Atherosclerosis, or hardening of the arteries, is the disease that causes heart attacks and strokes, and is commonly associated with modern risk factors like obesity, sedentary lifestyles, smoking, stress and high-fat diets. Atherosclerosis often causes arteries to become calcified, and this change is readily apparent on CT scans. Since the diet and lifestyles of ancient people are quite different from modern man, the investigators were surprised to find that atherosclerosis was so frequently seen. Sixteen mummies had identifiable arteries or hearts and of those, nine had calcification in the artery wall or path where the artery should have been.

Calcification was evenly discovered in male and female mummies, and more common in mummies thought to be 45 years or older at the time of death. It is thought that diet included grain, game, domesticated animals and fish. Salt was often used for preservation.

“While the presence of calcification does not demonstrate that atherosclerosis was a common cause of disease or death, it does provide evidence that humans in ancient times had the genetic predisposition and environment to promote the development of atherosclerosis,” said Dr. Thompson. “This study may begin to shed light on the relative importance of modern risk factors in causing hardening of the arteries. We all may be at risk for atherosclerosis, but it should be emphasized there is much we can do to minimize its extent and severity.”