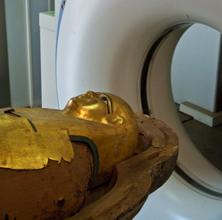 March 13, 2013 — Atherosclerosis is usually considered to be a disease of modern human beings, related to contemporary risk factors such as smoking, obesity and lack of exercise. However, the researchers suggest that the high prevalence of atherosclerosis in pre-modern humans may support the possibility of a more basic human predisposition to the disease.

An international group of researchers used computed tomography (CT) scans in the Horus Study to look for the characteristic signs of atherosclerosis — vascular calcification, or build-up of a hard calcified substance along the walls of arteries — in 137 mummies from ancient Egypt, Peru, southwest America and the Aleutian Islands in Alaska. This was one of the most popular clinical studies presented during the American College of Cardiology (ACC) 2013 meeting.

Where the mummies' arterial structure had survived, the researchers were able to attribute a definite case of atherosclerosis where they found signs of vascular calcification. In some cases, the arterial structure had not survived mummification, but the calcified plaque was still present in sites where arteries would have once been, in which case the researchers attributed a probable case of atherosclerosis.

Overall, the researchers found that more than a third (47, 34 percent) of the mummies examined showed signs of probable or definite atherosclerosis. As with modern populations, they found that older people seemed to be more likely to show signs of the disease — where it was possible to estimate the mummies' ages by examining their bone structure, they found that the age at time of death was positively correlated with the presence and extent of atherosclerosis.

Although previous research has uncovered atherosclerosis in a significant proportion of Egyptian mummies, this is the first study to look for the signs of arterial hardening in mummies from cultures living in disparate global regions, with different lifestyles and at different times. The findings are particularly significant because they appear to counter the proposition that the apparent prevalence of atherosclerosis in Egyptian mummies may be due to the fact that in ancient Egyptian society, it tended to be individuals with a high socioeconomic status who were mummified. Researchers have previously speculated that these individuals would have had a diet particularly high in saturated fat, which could have led to a higher than expected prevalence of atherosclerosis.

However, according to Randall Thompson, M.D., of Saint Luke's Mid America Heart Institute in Kansas City, "The fact that we found similar levels of atherosclerosis in all of the different cultures we studied, all of whom had very different lifestyles and diets, suggests that atherosclerosis may have been far more common in the ancient world than previously thought. Furthermore, the mummies we studied from outside Egypt were produced naturally as a result of local climate conditions, meaning that it's reasonable to assume that these mummies represent a reasonable cross-section of the population, rather than the specially selected elite group of people who were selected for mummification in ancient Egypt."

Thompson adds, "In the last century, atherosclerotic vascular disease has replaced infectious disease as the leading cause of death across the developed world. A common assumption is that the rise in levels of atherosclerosis is predominantly lifestyle-related, and that if modern humans could emulate pre-industrial or even pre-agricultural lifestyles, that atherosclerosis, or at least its clinical manifestations, would be avoided. Our findings seem to cast doubt on that assumption, and at the very least, we think they suggest that our understanding of the causes of atherosclerosis is incomplete, and that it might be somehow inherent to the process of human aging."

The research team was most surprised to find atherosclerosis among a population not suspected to be as susceptible: hunter-gatherers. Because of this population’s varied diet and high level of daily exercise, their risk factors for atherosclerosis would seem to be low. However, advanced atherosclerosis was found among mummies of the indigenous Aleutians, who even in 1900 were living traditionally: hunting seals,

fishing and gathering berries and sea urchins. Three of the five mummified adults of this area had atherosclerosis, including a woman of approximately 50 years of age who had heavy calcifications of two of her three coronary arteries.
Study findings may have implications for modern day patients in terms of risk factors, prevention and treatment, notes Thompson. While these findings may point to genetic and age-related factors playing a large role in development of atherosclerosis, he said, this is all the more reason for patients today to address the factors they can control: quitting smoking, cutting down on alcohol, eating a healthy diet, exercising and following up with health care providers to monitor blood pressure and cholesterol levels.
The Horus Study is the culmination of an international collaboration between physicians, anthropologists and biologists from numerous medical centers as well as the Smithsonian Institution, the Metropolitan Museum of Art, and the British, Egyptian, Brooklyn, University of Pennsylvania, and Peruvian Peruchuco Museums. The study was funded by a grant from the National Endowment for the Humanities, the National Bank of Egypt, Siemens and the St. Luke’s Hospital Foundation.