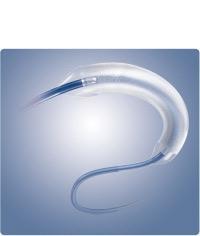 April 26, 2017 — Boston Scientific announced results from the RANGER SFA trial for the Ranger Paclitaxel-Coated PTA Balloon Catheter at the Charing Cross Symposium, in London. Data demonstrated that the drug-coated balloon (DCB) exhibited both a high rate of primary patency and freedom from target lesion revascularization (TLR) at 12 months, reducing the need for re-interventions to re-establish flow in previously blocked blood vessels.

The prospective, randomized, controlled trial, comparing the Ranger DCB to uncoated PTA balloons, included 105 patients with femoropopliteal lesions, at ten centers in Europe. Results demonstrate 86 percent primary patency and 91 percent freedom from TLR; both findings statistically significantly higher than the control arm of patients treated with an uncoated balloon. Patency was assessed by duplex ultrasound at 12 months post-procedure. Eighty-four percent of patients in the Ranger DCB group presented either with no or mild symptoms associated with claudication, or pain while walking. There were no target limb amputations.

“The rates of primary patency and freedom from target lesion revascularization are amongst the highest observed in this type of first-in-man trials at one year,” said Dierk Scheinert, M.D., chairman Division of Interventional Angiology, University Hospital Leipzig, Germany and principal investigator of the RANGER SFA trial. “As a clinician, it is important to have a treatment option, like the Ranger drug-coated balloon, that exhibits consistent performance and outcomes; for patients, these attributes impact their quality of life such as alleviating pain and discomfort, as well as reducing the probability of repeat procedures.”

To expand upon these findings, Boston Scientific recently received approval to commence enrollment in the RANGER II SFA study, a randomized Investigational Device Exemption trial designed to evaluate the safety and efficacy of the Ranger DCB versus standard PTA balloons. Anticipated enrollment will include up to 400 patients in 70 centers in the U.S., Canada, Europe, Japan and New Zealand. Data from the RANGER II SFA trial is expected to support regulatory submissions in the U.S. and Japan.

The Ranger drug-coated balloon received CE Mark in June of 2014 and is an Investigational device and not available for sale in the U.S.