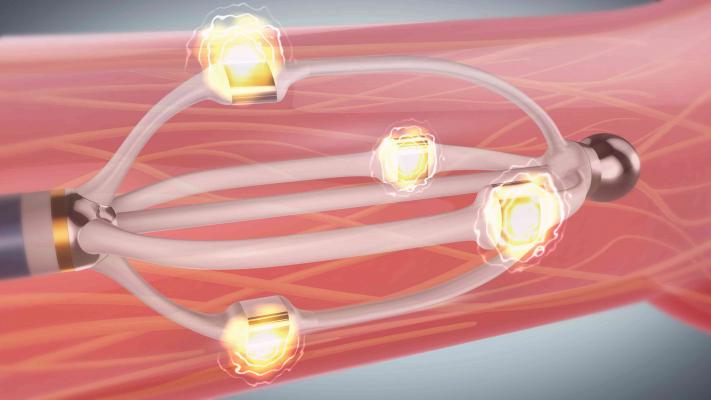 Renal denervation is a specialized ablation procedure that has demonstrated a reduction in blood pressure for patients with hypertension, or high blood pressure, that is resistant to medical therapy. The EnligHTN system delivers radiofrequency (RF) energy from an ablation catheter to create lesions (tiny scars) along the renal nerves — a network of nerves in the walls of the renal arteries thought to help control blood pressure. The intentional disruption of the nerve supply has been found to help reduce systolic and diastolic blood pressure. The system catheter has a unique, non-occlusive basket design with multiple electrodes, which help physicians deliver a predictable treatment pattern while allowing for continuous blood flow to the kidney throughout the procedure. The next-generation EnligHTN system, CE Mark approved in 2013, delivers simultaneous ablations via a multi-electrode catheter, reducing total ablation time by more than 80 percent in comparison to the first generation system, from approximately 24 minutes to four minutes.

“The 12-month data for EnligHTN III continues to show the benefits of the EnligHTN Renal Denervation System and merits for its potential to change the way hypertension is treated,” said Prof. Stephen Worthley of St. Andrew's Hospital in Adelaide, Australia, a principal investigator of the EnligHTN III study. “These data continue to demonstrate that the multi-electrode system from St. Jude Medical provides a safe and effective alternative for patients with drug-resistant and uncontrolled hypertension.”

The EnligHTN III study is an international, non-randomized clinical trial that followed device performance and assessed outcomes at six centers through twelve months of follow-up for 37 eligible patients.

“We are pleased with the progress of our EnligHTN Renal Denervation program,” said Mark D. Carlson, chief medical officer for St. Jude Medical. “Our innovative EnligHTN technology with its multiple electrode basket design allows for consistent lesion creation that we believe minimizes variability during the procedure.”

The EnligHTN III study expands upon the research conducted in the EnligHTN I trial of the first-generation EnligHTN system, which demonstrated that patients with drug-resistant hypertension had a safe drop in blood pressure.