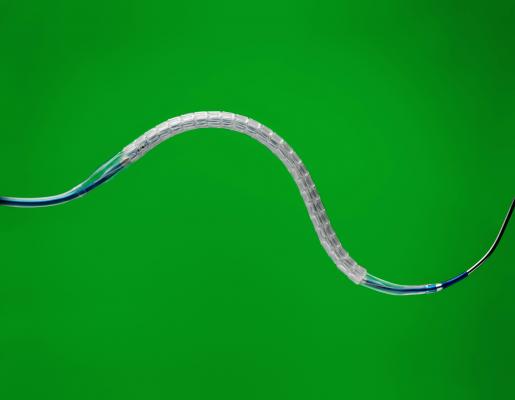 July 11, 2016 — University Hospitals Case Medical Center, Cleveland, is among the first in the country – and the first in Ohio — to offer and deploy the Abbott Absorb stent, a completely bioresorbable stent. The Absorb stent works exactly as its traditional metallic predecessors in that it opens a blocked coronary artery, with one major exception — it dissolves completely in the body two to three years after implantation.

On July 8, University Hospitals (UH) implanted its first Absorb dissolving stent on a patient with coronary artery disease. UH is one of 50 sites around the nation who will launch the Absorb product.

Recently approved by the U.S. Food and Drug Administration (FDA), Absorb is the first and only fully dissolving stent approved for the treatment of coronary artery disease, which impacts over 15 million people in the United States and is the world's leading cause of death.

Like traditional metallic DES, Absorb opens a patient's blocked artery but then disappears after leaving no metal behind to restrict natural vessel motion. Absorb is made of polyactic acid similar to material used in dissolving sutures. Through the process of hydrolysis, the scaffold is metabolized after two to three years.

In clinical studies conducted throughout the world, the new stent demonstrated comparable short-term and mid-term outcomes compared to the leading metallic stent. After the first year of the clinical trial of approximately 2,000 patients in the United States (Absorb III randomized trial), patients who received the Absorb experienced comparable rates of specific adverse events in the intended patient population.

It also eliminates the need for layer upon layer of metal in a situation where patients experience in-stent restenosis. Additionally it reduces the amount of metal in the coronary arteries when the patient requires multiple stents.

"The device restores vasomotor function and pulsatility allowing the artery to move and more naturally regulate blood flow," said Bezerra, who is also assistant professor, medicine, Case Western Reserve University School of Medicine. "It also avoids the long-term future complications related to metallic stents, such as inability to graft to a fully stented artery in the event that a patient needs coronary artery bypass grafting."

Bezerra and Attizzani have both been involved with the imaging core lab for Absorb studies around the world.  While studying structural cardiology in Italy, Attizzani, a clinical assistant professor, medicine, CWRU School of Medicine, also had opportunity to implant hundreds of Absorb BVS and participate in European studies of the device. The device has been widely used in Europe for about five years.

Abbott is using Bezerra's imaging expertise to teach and train staff and physicians around the world about the importance of vascular imaging and why it makes a difference in the proper deployment technique for Absorb.