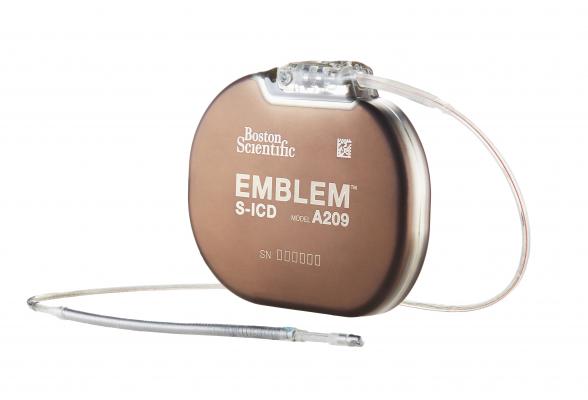 The global, prospective, non-randomized UNTOUCHED study evaluated the safety and efficacy of the Boston Scientific Emblem S-ICD System – the only approved implantable defibrillator without wires touching the heart –  for primary prevention of sudden cardiac death specifically in patients with a left ventricular ejection fraction (LVEF) ≤35 percent, the most common population to be indicated for ICD therapy.[1,2] Data demonstrated S-ICD therapy had an inappropriate shock-free rate of 95.9 percent at 18-months post-procedure, meeting the primary endpoint with a rate comparable to or lower than those seen in previous S-ICD and transvenous implantable cardioverter-defibrillator (TV-ICD) studies.

"This study conclusively shows high efficacy and safety of the Emblem S-ICD and the current generation Emblem MRI S-ICD with contemporary programming, despite the patients being some of the sickest studied to date, with much lower LVEF, more hypertension and diabetes," said Michael R. Gold, M.D., Ph.D, principal investigator and Michael E. Assey professor of medicine at The Medical University of South Carolina, Charleston. "Additionally, the rate of inappropriate shock was lower than that of many studies of TV-ICDs with contemporary programming designed to minimize this rate, validating use of the S-ICD as a first line therapy for the majority of patients in need of a device to manage risk of sudden cardiac death in the absence of pacing indications."

The endpoint analysis included data from 1,111 patients with a low LVEF, the majority of whom (53.8 percent) had ischemic heart disease and 87.6 percent with heart failure. Study authors reviewed the incidence of inappropriate shocks in these patients after 18 months to determine if it was higher than in a historical control group of patients who had a similarly programmed TV-ICD. Data also demonstrated a 97.6 percent inappropriate shock-free rate at one year for patients who had the SMART Pass sensing filter – an advanced feature that filters out certain signals that are the primary reason for inappropriate shocks – enabled on the newest generation Emblem MRI S-ICD System devices.

Also presented as a late-breaking clinical trial at the virtual meeting were results from the investigator-sponsored PRAETORIAN trial. Investigators of the prospective, randomized, head-to-head clinical trial confirmed that the S-ICD can be the preferred therapy choice for the majority of ICD-indicated patients without a need for pacing as it offers comparable performance while avoiding lead-related complications and serious infections associated with TV-ICDs.

"The Emblem S-ICD System has been implanted in more than 75,000 patients worldwide, providing a safe and effective therapy while avoiding many of the issues associated with TV-ICD leads," said Kenneth Stein, M.D., senior vice president and chief medical officer, Global Health Policy and Rhythm Management, Boston Scientific. "The UNTOUCHED and PRAETORIAN study data add to the body of evidence showing the benefits of the S-ICD System and further emphasize this device should be considered a first-line therapy for a broad group of ICD-indicated patients without a need for cardiac pacing."