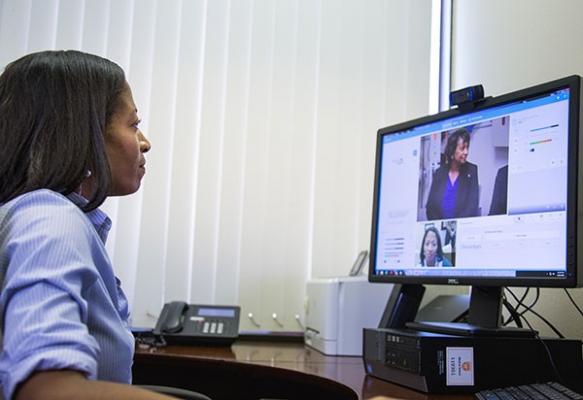 April 24, 2019 — Stroke patients examined remotely by a teleneurologist were treated as quickly and effectively after hours as during normal business hours, according to new research by The University of Texas Health Science Center at Houston (UTHealth).

Previous research has shown that during regular business hours, telemedicine is as effective for the acute stroke patient as arriving at a stroke center. Published research has also found that patients arriving overnight or on weekends at stroke centers experienced worse outcomes. But there was no such drop-off in care for patients treated after hours with telemedicine, authors reported. The study was published in the Journal of Stroke and Cerebrovascular Diseases.

“There has been evidence showing higher mortality in patients presenting overnight or on weekends at primary stroke centers, known as the ‘weekend effect,’” said first author Tiffany “TC” Cossey, M.D., assistant professor of neurology at McGovern Medical School at UTHealth, who is part of the UTHealth Telemedicine Program.

“This is the first study to analyze whether there is any ‘weekend effect’ for telemedicine stroke patients,” Cossey said. “We hypothesized that hospitals with continuous availability of remote telestroke expertise would have consistent patient care and outcomes irrespective of the day or time, and our findings confirmed this.”

During the study, the UTHealth Telemedicine Program provided 15 non-stroke-center hospitals, some as far away as 250 miles, with round-the-clock coverage by a rotating team of vascular neurologists. When a suspected stroke patient arrived at one of the hospitals, the patient was evaluated and a page sent to the on-call teleneurology number. The McGovern Medical School teleneurologist called to discuss the case with the hospital, reviewed the computed tomography (CT) scan and then assessed the patient via the telemedicine video platform.

The study reviewed 424 acute ischemic stroke patients who had telemedicine consultations and received tissue plasminogen activator (tPA), known as a clot-buster, within 4 1/2 hours of symptom onset from September 2015 to December 2016.

Findings revealed there was no difference in tPA treatment times between regular hours and after-hours (door-to-needle time was 61 and 59 minutes respectively). How soon patients receive tPA after arrival at the hospital is a national benchmark for clinical care as it has a critical bearing on survival and rates of complication and disability.

“Although tPA and intra-arterial therapy are highly utilized in many stroke centers, this is much less so in community hospitals which often have limited neurology presence and no endovascular care at all,” Cossey said. “Telemedicine is a great way to fill that gap because it makes a neurologist available to patients as if they were in a comprehensive stroke center in many ways.”

Overall, the findings revealed similar patient mortality at day 90 between on-hours and after-hours patients. After adjusting for risk factors between the two groups, the odds ratio, which indicates relative likelihood, of mortality was 0.94 (odds ratio of 1.0 indicates both groups have exactly the same odds). The same measure was used to compare the level of disability patients in the two groups had at day 90. Both groups were almost equally likely to have favorable outcomes, with an odds ratio of 0.96.

“Overall stroke mortality has decreased – it’s now the fifth leading cause of death in the U.S. – and patient outcomes have improved. However, there is still considerable geographic disparity in the level of care available,” Cossey said. “Telemedicine can help to reduce this considerably by giving rural critical care and primary stroke centers, which may not have 24-hour coverage, access to round-the-clock stroke specialist care.”

Most strokes are ischemic. An ischemic stroke occurs when an artery that supplies oxygen-rich blood to the brain becomes blocked, often due to a blood clot. As the only U.S. Food and Drug Administration (FDA)-approved medication to treat acute ischemic stroke, tPA works by dissolving the blockage in the artery depriving blood from that area of the brain. Many stroke patients miss out because they arrive at the hospital later than the 4 1/2-hour time window of potential tPA opportunity.

“How soon after symptom onset ischemic stroke patients receive tPA is a major predictor of whether they will survive and how severely their faculties will be impacted. Telemedicine can play a vital role in speeding up access to this vital treatment,” Cossey said. “For any hospital that does not have 24/7 stroke expertise, they can therefore consider implementing teleneurology as a way to help improve patient outcomes.”