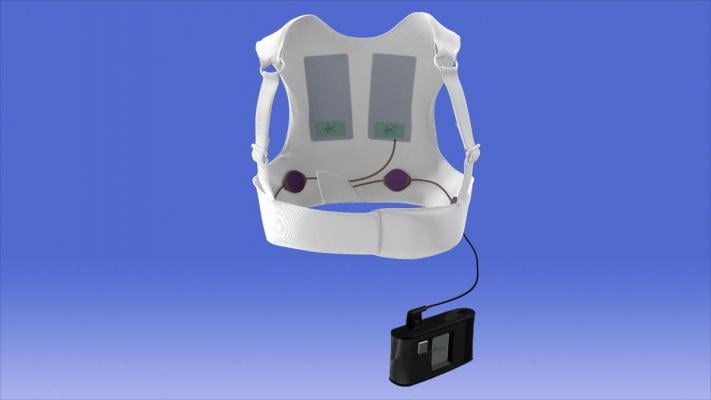 Previously reported results from the WEARIT-II registry demonstrated a high sustained VT/VF event rate, with 22 events per 100 patient-years—2.1 percent of patients had a VT/VF event. One in 14 patients experienced a clinically meaningful arrhythmia requiring intervention while wearing the LifeVest.

Patients in the study used the LifeVest for a median of 90 days and only 40 percent received an implantable defibrillator following LifeVest use, according to Zoll LifeVest President Jason T. Whiting. He also noted survival was high even approximately nine months after ending use of LifeVest.

The wearable defibrillator is included in the 2015 European Society of Cardiology Guidelines for the Management of Patients with Ventricular Arrhythmias and the Prevention of Sudden Cardiac Death and has received formal recommendations in the 2016 American Heart Association Science Advisory for the Wearable Cardioverter Defibrillator, with endorsement from the Heart Rhythm Society.

On any given day, tens of thousands of people around the world are protected from sudden cardiac death (SCD) by the LifeVest Wearable Defibrillator. The LifeVest is used for a wide range of patient conditions or situations, including following a myocardial infarction, before or after coronary revascularization, and for those with cardiomyopathy or congestive heart failure that places them at particular risk. The LifeVest gives physicians time to optimize medical therapy and assess a patient’s long-term risk for sudden death.

The LifeVest is lightweight and easy to wear, allowing patients to return to their common activities of daily living, while having the peace of mind that they are protected from SCD. The LifeVest continuously monitors the patient’s heart and, if a life-threatening heart rhythm is detected, the device delivers a treatment shock to restore normal heart rhythm.