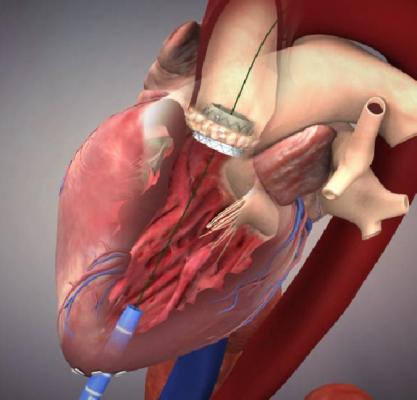 June 19, 2015 - Edwards Lifesciences Corp. announced U.S. Food and Drug Administration (FDA) approval of the Edwards Sapien 3 valve with the Commander Delivery System for the treatment of high-risk patients suffering from severe, symptomatic aortic stenosis. The new version of the Sapien has a fabric skirt at its base to better seal the valve against the annulus to help eliminate paravalvular leak.

"The SAPIEN 3 valve sets a new standard for transcatheter heart valve performance and patient outcomes," said Martin B. Leon, M.D., director of the Center for Interventional Vascular Therapy at NewYork-Presbyterian/Columbia University Medical Center and professor of medicine at the Columbia University College of Physicians and Surgeons. "We have seen some of the best results to date from the PARTNER II Trial in treating high-risk patients with the Sapien 3 valve. The PARTNER II study concluded that this new valve reduced several complications associated with the TAVR procedure such as paravalvular leakage and stroke, and represented a meaningful improvement over data from prior studies with earlier-generation devices," Leon said.

The Sapien 3 valve - available in 20mm, 23mm, 26mm and 29mm sizes - has an outer skirt (a cuff of fabric surrounding the valve frame), providing a seal to address paravalvular leak.

Given the earlier-than-anticipated FDA approval of the device, the company is ramping up supply and expects the launch to be largely completed by the end of the year.

The Sapien 3 valve has been commercially available in Europe since January 2014.