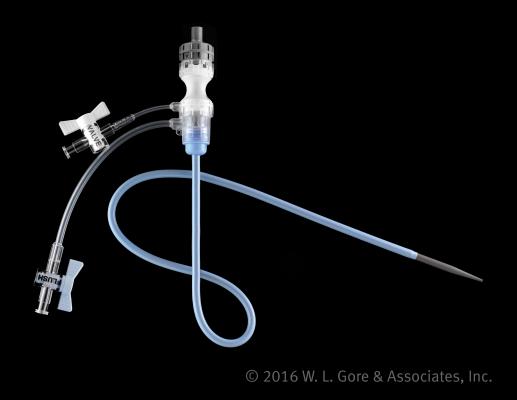 August 30, 2016 — W. L. Gore & Associates Inc. (Gore) announced the commercial availability of the Gore DrySeal Flex Introducer Sheath, after recently gaining clearance for use by regulatory bodies in the United States, Europe, Canada and Australia. The device is designed with a distinct combination of enhanced flexibility, kink resistance and a hydrophilic coating to facilitate access to challenging anatomies and branch vessels, such as the common iliac arteries, during endovascular repair procedures.

The 12 Fr x 45 cm sheath configuration is engineered specifically for use with the Gore Excluder Iliac Branch Endoprosthesis (IBE), the only device indicated in the United States for endovascular repair (EVAR) of common iliac artery aneurysms or aortoiliac aneurysms, according to the company. An EVAR often requires multiple wires and catheters be transferred into the vessel via an introducer sheath, which can lead to blood loss through the sheath valve. The sheath’s exclusive DrySeal valve was designed to minimize blood loss, enabling the introduction of multiple devices with proven hemostasis control.

“Nearly a third of patients being considered for EVAR have an aneurysm that extends to the iliac artery. The IBE is a trusted solution in such cases, but previously no introducer sheaths designed for use with this device existed,” said Marcus Brooks, consultant vascular surgeon, North Bristol NHS Trust. “With the Gore DrySeal Flex Introducer Sheath, I now have a sheath specifically designed for use with the IBE and flexible enough for easy access to the iliac branch vessels.”

The new sheath leverages technology from the Gore DrySeal Sheath, which features a hydrophilic coating for improved access into vessels. In addition, the Gore DrySeal Flex Introducer Sheath offers an optimized profile and new configurations which include working lengths of 33, 45 and 65 cm.

“The availability of this new sheath provides more options to treat a broader range of patient anatomy,” said Jason T. Lee, M.D., professor of surgery at Stanford School of Medicine. “The sheath supports my cases from start to finish, offering confidence for a wider range of applications than ever before.”