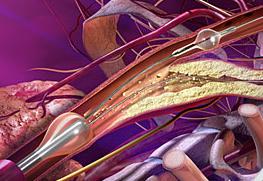 One of the major challenges associated with CAS is the risk of peri-procedural embolic events that could cause a stroke. The GORE Flow Reversal System is a unique neuroprotection technology that reverses the flow of blood at the treatment site prior to crossing the lesion. Flow reversal is achieved by selectively occluding common carotid and external carotid artery blood flow. By establishing an arterio-venous shunt, blood from collateral vessels via the Circle of Willis is redirected to the lower pressure venous return. Macro and micro emboli are continuously directed away from the brain during flow reversal.

“The GORE Flow Reversal System is not only a significant advancement in neuroprotection, it is an important step forward for carotid stenting that may help establish carotid stenting as the therapy of choice for a greater number of patients,” said Daniel G. Clair, M.D., FACS, of the Cleveland Clinic Foundation and national co-principal investigator for the Gore EMPiRE clinical study.

In the Gore EMPiRE clinical study, the safety and efficacy of the GORE Flow Reversal System during CAS was assessed in patients at high risk for carotid endarterectomy. EMPiRE met the primary endpoint of major adverse events of death, stroke, transient ischemic attack, and myocardial infarction (MI). The 30-day stroke, death, and MI rate was 3.7 percent and the death/any stroke rate was 2.9 percent. The study also showed encouraging results in some of the most challenging patient populations with a low death, stroke, and MI rate of 2.6 percent for octogenarians and 3.8 percent for symptomatic patients, Gore said.

“The results from the Gore EMPiRE clinical study are extremely promising as we strive to better protect patients and demonstrate the value of CAS in the treatment of carotid disease,” said L. Nelson Hopkins, M.D., of the University of Buffalo and national co-principal investigator. “This is one of the first CAS studies to report rates within the American Heart Association guidelines for carotid endarterectomy. We are optimistic that evolving technologies, such as the GORE Flow Reversal System, will enable CAS to become the therapy of choice in the treatment of carotid disease.”