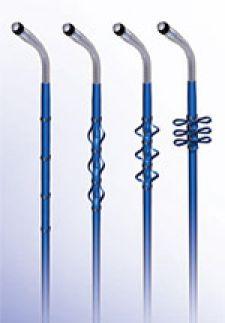 The Attain StarFix lead, according to the manufacturer, overall, including the acute dislodgements at one day post-implant, has had a low 0.7 percent dislodgement rate. These dislodgement rates are supported by one of the industry’s largest and longest-running left-heart lead clinical studies involving 385 implants followed for up to four years.

The Medtronic Attain StarFix steroid-eluting unipolar lead has a 5-French diameter and is available in 78, 88 and 103 cm. lengths. The Attain StarFix's design includes three soft, polyurethane lobes near the lead tip that, when expanded, enable stable lead placement in the target location. The soft, pliable lobes, which can be deployed to up to a 24-French diameter - about one quarter inch - can reportedly be relaxed multiple times to allow for acute repositioning of the lead as necessary. Once deployed, the electrode is securely fixed in place, reducing the potential for dislodgement.

The Attain StarFix lead, which will be commercially available nationwide in late summer 2008, is designed to complement the Attain Model 4193 and Model 4194 over-the-wire leads. The Attain catheters along with the Attain Hybrid Guide Wires are used to deliver leads for precise placement in a wide variety of coronary anatomies. It can be used with any Medtronic CRT-defibrillator (CRT-D), including those within the company's new Vision 3D(tm) portfolio. The new Vision 3D wireless ICD and CRT-D portfolio offers unparalleled depth and breadth of unique clinical options that are built on our industry leading pacing and ICD exclusives.