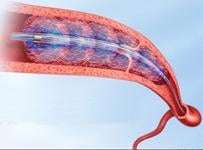 The MACH4e upgrade achieves faster removal of arterial and venous clots, which the company says accelerates thrombolysis by up to 40 percent (1). For simplicity, the new system automates a number of manual steps, making it easier to use.

The company said the system can be used to treat clots in veins, arteries, IVC filters and difficult-to-reach places such as behind valves. The ultrasound waves help increase drug uptake by the clot and uses 50-70 percent less lytic drug (3). The device reduces the risk pf thrombus fracture or breakage (4), reducing the risk of distal embolism, or post thrombotic syndrome (PTS).

During the Veith Symposium Mark J. Garcia, M.D., program director, vascular and interventional radiology fellowship and section chief, vascular and interventional radiology at Christiana Care Health Services in Newark, Del., presented a series of 35 patients with chronic, hard and occlusive DVT that were successfully treated with endovascular techniques. He said the EKOs system is a major breakthrough in restoring quality of life to the patient.

“The EKOS ultrasound assisted thrombolysis, in addition to standard angioplasty and stenting techniques, led to successful venous recanalization and patency with improved venous outflow,” said Dr. Garcia. “Our results suggest that the ability to successfully recanalize chronically occluded venous segments in patients with PTS, benefit the patient by reducing their symptoms and allowing them to enjoy an improved quality of life.”

EKOS pioneered the development and clinical application of ultrasonic accelerated drug delivery in medicine, introducing its first system for the treatment of vascular thrombosis in 2005. In 2008, the company introduced its second-generation EkoSonic Endovascular System with Rapid Pulse Modulation. In November 2009 introduced the MACH4e upgrade.