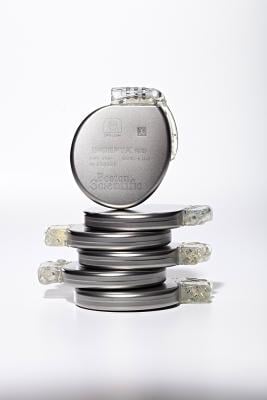 Patients in mild heart failure who receive a cardiac resynchronization therapy defibrillator (CRT-D) device may live longer than those implanted with a traditional implantable cardioverter defibrillator (ICD), according to research presented at the American College of Cardiology’s 63rd Annual Scientific Session.
In the longest follow-up of CRT for patients with mild heart failure to date, the continued analysis of the landmark MADIT-CRT study showed heart failure patients with left bundle branch block (LBBB) implanted with a CRT-D had a 41 percent reduced risk of death compared to patients who had a conventional ICD. The probability of all-cause mortality at seven years was 18 percent among the CRT-D patients, compared to 29 percent in the ICD group in this subset of patients. The five-year survival rate for patients with CRT-D was close to 90 percent, and more than 80 percent of patients who received CRT therapy were still alive at seven years.
In addition to the mortality benefit, the results demonstrate that these patients experienced a 62 percent relative reduction in the risk of experiencing a first heart failure event when compared to patients who did not receive CRT therapy.
“Based on our findings, we now have an intervention that can potentially change the outcomes for certain heart failure patients,” said Ilan Goldenberg, M.D., director of the department of cardiology, Israel’s Leviev Heart Center, Sheba Medical Center, Tel Hashomer, Israel, and one of the lead investigators of the study. “We can intervene early in the course of the disease to reduce the risk of long-term mortality in these patients.”
The MADIT-CRT trial was originally conducted to expand the FDA indications for CRT-D use in mild heart failure patients to prevent them from progressing from New York Heart Assn. Class I or II heart failure to advanced stage Class III or IV.
Trial Details
The Multicenter Automatic Defibrillator Implantation with Cardiac Resynchronization Therapy (MADIT-CRT) trial enrolled 1,820 patients with mild or no heart failure symptoms — including 1,281 with LBBB in this analysis — and randomized them to receive CRT-D therapy or ICD. ICDs are implanted in the right ventricle of patients at high risk of sudden cardiac death due to heart arrhythmias. When patients have a life-threatening arrhythmia, the ICD delivers an electrical shock to help restore a regular heartbeat. A CRT-D differs from an ICD in that it has a second electrode over the left ventricle of the heart to help synchronize a patient’s heartbeat and improve cardiac function.
Patients enrolled in the study were diagnosed with New York Heart Assn. Class I or II (mild) heart failure, left ventricular dysfunction and an ejection fraction of 30 percent or lower. The original trial followed patients for an average of 2.4 years, and the current study extended this follow-up for up to seven years from enrollment.
According to Goldenberg, previous studies have shown survival benefits from CRT-D in patients with moderate-to-severe symptoms, where intervention took place relatively late in the course of the disease when mortality rates are high. This study is the first to show the significant survival benefit when CRT-D is used with mildly symptomatic patients or asymptomatic patients with cardiac dysfunction.
The significant long-term survival benefit of CRT-D in the trial was observed only among patients with LBBB, Goldenberg said. The study does not support early intervention with CRT-D in patients without LBBB.
While researchers expected to find mortality reduction in patients with left bundle branch block during long-term follow-up. “We were surprised by the consistency of results in each subgroup of these patients, regardless of age, gender or the cause or duration of heart failure,” Goldenberg said.
Goldenberg recommends additional research to see if similar benefits are found in patients with higher ejection fractions and among those without any symptoms of heart failure. The study was supported by an unrestricted grant from Boston Scientific, St. Paul, Minn.
CRT Battery Life Extended
One issue with implantable electrophysiology devices has been battery life, which has become more of an issue as survival continues to improve due to these devices. Boston Scientific, the sponsor of the MADIT-CRT trial, said the new battery technology in its CRT-Ds has lasted in this trial out to at least seven years. The vendor said longer battery life may reduce the need for additional device implants in patients with heart failure, and could help reduce healthcare costs.
This study was simultaneously published online in the New England Journal of Medicine at the time of presentation.
For more information: www.nejm.org/doi/full/10.1056/NEJMoa1401426?query=featured_cardiology
Related ICD Content