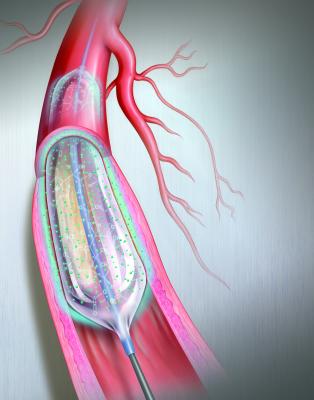 The Bard Lutonix drug-eluting balloon was the first DEB to gain FDA approval in October 2014. Illustration by Mike Austin. Copyright 2015. All Rights Reserved.

Drug-eluting balloons (DEBs), also referred to as drug-coated balloons (DCBs), have been one of the long-awaited new transcatheter technologies to help reduce high restenosis rates in peripheral artery disease (PAD). The U.S. Food and Drug Administration (FDA) cleared C. R. Bard’s Lutonix 035 DEB in October 2014 and Medtronic’s In.Pact Admiral DEB in January 2015. Both are indicated for use in the superficial femoral and popliteal arteries in the upper leg.

DEB technology is expected to greatly impact the treatment of PAD, which is plagued with restenosis and revascularization rates as high as 50-70 percent at one year following traditional balloon angioplasty. DEB trial data show restenosis rates of between 2.5 to 13 percent. DEBs are used like traditional angioplasty balloons, but once expanded, they elute the antiproliferative drug paclitaxel into the vessel wall. The purpose of the agent is the same as drug-eluting stents (DES) that use similar antiproliferatives to prevent the buildup of neointimal scar tissue that leads to restenosis. However, DES are not typically used in the legs due to a high rate of stent fracture, which also can lead to restenosis.

“The introduction of drug-coated balloons represents a significant breakthrough that might establish a new standard of care with its potential to change the way we treat peripheral artery disease in the leg,” according to Michael Jaff, DO, Paul and Phyllis Fireman Chair in Vascular Medicine at the Massachusetts General Hospital, Boston, Mass. He participated in the studies that led to the FDA approval of the In.Pact DEB. “Data from clinical trials evaluating this new drug-coated balloon have consistently demonstrated improved patient outcomes.”

Paclitaxel has a very high pharmacokinetic transfer rate into the vessel wall and is used on both DEBs now on the U.S. market. It also is used in all other DEBs in development or already approved in Europe.

Watch the VIDEO “Drug-coated Balloons Enter the U.S. Market,” an interview with Doug Drachman, M.D., Mass General Hospital, who served a the site principal investigator for the Lutonix balloon trial, explains his experiences and insights with these devices in an interview at ACC 2015.

In February, the U.S. Centers for Medicare and Medicaid Services (CMS) approved a transitional pass-through payment for both the Lutonix and the In.Pact Admiral under the Medicare hospital outpatient prospective payment system (OPPS). This removed a potential barrier to patient access to the new medical device. This supplemental reimbursement provision takes effect April 1, 2015 and will remain in effect for the following two to three years. It aims to cover the additional cost to U.S. hospitals for treating Medicare beneficiaries with DEBs in the outpatient setting. The Healthcare Common Procedure Coding System (HCPCS) code for this new device category will be C2623 (catheter, transluminal angioplasty, drug-coated, non-laser). A similar supplemental payment to hospitals that treat Medicare beneficiaries with the device on an inpatient basis is currently under review by CMS, with a decision expected this summer.

The DEB arm of the In.Pact SFA Trial demonstrated the lowest clinically-driven target lesion revascularization (CD-TLR) rate ever reported for an interventional treatment of PAD in the superficial femoral artery (SFA). Only 2.4 percent of patients treated with the In.Pact Admiral DCB required a repeat procedure at one year. This is compared to one in five patients (20.6 percent) treated with percutaneous transluminal angioplasty (PTA).

Bard’s Lutonix 035 FDA approval was supported by results of the LEVANT 2 pivotal study, a global, prospective, single-blind, randomized, 54-site study (42 sites in the U.S. and 12 in Europe) that enrolled all patients under one protocol. At one year, the LEVANT 2 study demonstrated improved patency of the Lutonix 035 DCB compared to standard PTA: 73.5 percent vs. 56.8 percent, p<0.001 by Kaplan-Meier time-to-event analysis. It also demonstrated clinical benefits of sustained improvement in Rutherford Class and improved walking distance scores.

The LEVANT 2 study followed a rigorous blinding protocol designed to reduce bias in the results to accurately and scientifically assess and compare the long-term performance of key clinical measures. The LEVANT clinical program, which includes registry data, enrolled more than 1,000 patients and demonstrated robust safety of the device comparable to PTA, including the same low rate of distal embolic events and rate of re-intervention for thrombotic events.

The In.Pact Admiral delivers the paclitaxel in a 3.5 µg/mm2 dose to maximize therapeutic benefit and remains at therapeutic levels for up to 180 days.  The Bard Lutonix uses a lower dose of paclitaxel, with a therapeutic dose in a concentration of 2 ?g/mm2.

One issue with DEBs is the amount of drug loss, with only 1-10 percent of the drug transferring into the vessel wall and the rest, around 60-70 percent, going into the bloodstream. For this reason, the key to developing a DEB is largely in how the antiproliferative drug is attached to the balloon surface to keep it from dissolving once inside a vessel before reaching its destination, and the pharmacokinetics of the drug once it is delivered to a vessel segment, said Juan Granada, M.D., executive director and chief innovation officer at the Cardiovascular Research Foundation’s Skirball Center for Innovation, who spoke on the technology at Transcatheter Cardiovascular Therapeutics (TCT) 2014. He worked with Covidien to help develop its DEB technology.

Granada said paclitaxel is an ideal agent for single-time drug delivery because it is non-specific in its binding and absorbs quickly into the adventitia. The agent also can be processed in different ways to get various crystal formations, including amorphous, anhydrous, crystalline nanospheres and microcrystals. For these reasons, all DEBs use paclitaxel in a concentration of 2 or 3 micrograms per square millimeter (?g/mm²).

“If you can change the crystallinity of paclitaxel, you come up with different pharmacokinetics,” Granada explained. “Crystallinity is very important to delivery and efficacy in developing drug-coated balloons.”

He said amorphous formations are more soluble that crystalline variations, which allow faster absorption. However, crystals stay on the surface of the tissue longer, which allows the drug to be absorbed overtime. Granada said a combination of both types of drug formulations are being investigated for the best of both worlds, for immediate tissue response and the ability to extend the time release of the antiproliferative effects.

There are four key components to a DEB, said Prakash Krishnan, M.D., FACC, FSCAI, director of endovascular interventions of Mount Sinai Hospital, who spoke on DEBs at TCT 2014. These include the balloon platform, the drug, an excipient to hold the drug on the balloon and control its release, and the balloon coating process. Each of these influence the performance of a DEB in terms of durability, deliverability and uptake of the drug into the vessel wall.

There are several agents used as excipients. These agents also help preserve the crystalline structure of the paclitaxel and facilitate moving the hydrophobic paclitaxel from the balloon surface into the wall of the vessel. Urea is used on the In.Pact Admiral and polysorbate and sorbitol are used on the Lutonix. Excipients used by other vendors include iopromide (iodine contrast agent), butyryl-tri-hexyl citrate (BTHC), and aleuritic and shelloic acid. DEBs from Cook and Aachen Resonance do not use an excipient, instead the drug is carried directly on the balloon.

From an economic prospective, healthcare needs to become more efficient with faster procedure times, reduced procedural costs, faster recovery times, reduction of necessary materials and more durable clinical outcomes, explained Thomas Zeller, M.D., chief, department of angiology, Universitäts-Herzzentrum Freiburg-Bad Krozingen, Germany. He spoke on the economic impact of DEBs at TCT 2014. He said DEBs might help address some of these needs. If DEB trial data trends continue to be positive, especially with lower retreatment rates, he said these devices may offer economic advantages over stents or angioplasty alone. This may influence reimbursement rates in the future, or influence treatment choices based on bundled payments. He said the biggest benefit of DEBs is eliminating the need for regular, repeat procedures, which are a common attribute of peripheral artery procedures.

Read the article "First Drug-Eluting Balloon Brought Before the FDA."