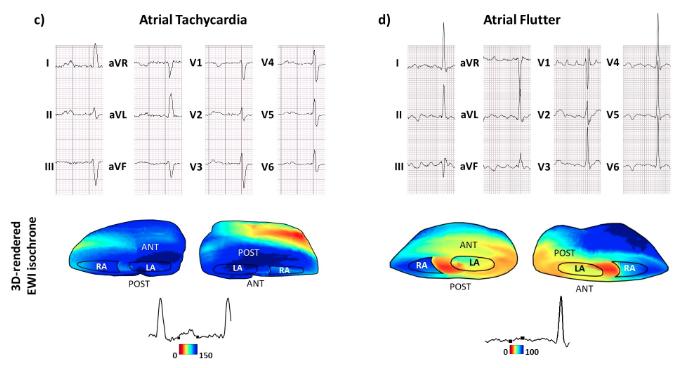 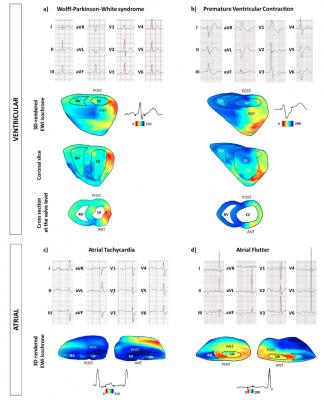 May 15, 2019 — A new study shows electromechanical wave imaging is capable of localizing arrhythmias including atrial tachycardia (AT), atrial flutter (AFL), premature ventricular complexes (PVC), and accessory pathways (AP) in Wolff-Parkinson-White syndrome prior to catheter ablation. The double-blinded study for this new technology was presented as a late-breaking session at Heart Rhythm 2019, the Heart Rhythm Society's 40th Annual Scientific Sessions.

Diagnosis and localization of arrhythmias are critical for decision making and treatment planning prior to cardiac ablation. The 12 lead ECG is the main noninvasive tool used to localize arrhythmias, however it can be limited in specificity and subject to interobserver variability. Electromechanical Wave Imaging (EWI) is a novel, high frame rate 3-D rendered ultrasound technique that can noninvasively map the electromechanical activation of heart rhythm.

In the study, patients presenting for catheter ablation of AT, AFL, PVCs, or an AP underwent transthoracic EWI and 12 lead ECG prior to the ablation. 67 patients were consented, 12 patients were excluded due to withdrawal of consent, poor imaging or not being in the arrhythmia at time of imaging. There were 55 patients who underwent EWI (mean age 56.0±2.3 years, 71% male). Of these, 22% had WPW, 20% had PVCs, 13% had AT and 45% had AFL. Six blinded clinical electrophysiologists predicted arrhythmia origins based on ECG alone. EWI isochrone processing was blinded to all clinical data except arrhythmia type. Operating physicians were blinded to EWI isochrones. EWI and ECG predictions were compared to arrhythmia location as determined by 3-D electroanatomic mapping and ablation using a standardized 21 segment cardiac model.