Accurate sizing of the ASD occluder is crucial to prevent rare, life-threatening events 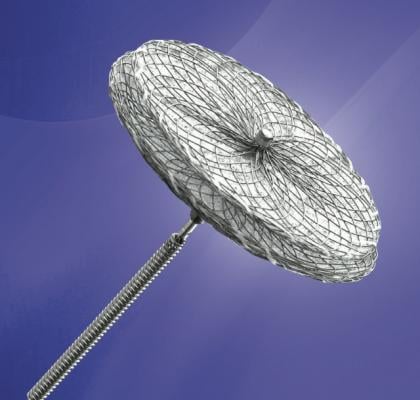 The Amplatzer ASD closure device is passed through a septal defect and is deployed as show. It has two nitinol mesh sections which grasp septal wall on either side of the defect.

The U.S. Food and Drug Administration (FDA) issued a warning this week about safety issues encountered with the St. Jude Amplatzer Atrial Septal Occluder (ASO). The transcatheter device is used to seal congenital holes in the atrial septum. The FDA reported in a rare safety communication that the device may cause life-threatening tissue erosion inside the heart.
Between 2002 and 2011, the FDA received more than 100 reports of erosions associated with the Amplatzer ASO. During the same period, several medical journals contained articles reporting tissue erosion among patients implanted with this device. The FDA said these cases resulted in life-threatening emergencies that required immediate surgery.
The device is made of a self-expanding nitinol metal mesh, which if the device is sized improperly, will rub against the wall of the heart and erode the tissue, creating a hole. The FDA said It can also lead to further scraping or erosion through tissue in the upper chambers (atria) of the heart, primarily in the top of the atria near the aorta. This scraping may also cause separate or simultaneous holes in the aortic root, potentially leading to blood building up in the sac surrounding the heart (cardiac tamponade). If too much blood builds up in this sac, the heart will not be able to work properly.
The FDA reported immediate open-heart surgery may then be necessary to remove the device, close the holes or other defects caused by erosion, and close the original defect the device was meant to treat less invasively. Tissue erosion can also cause fistulas - abnormal scar tissue that connects parts of the heart that were not previously connected. Fistulas are not life-threatening, but do require surgery for treatment and could result in congestive heart failure.
The FDA has not yet identified risk factors related to the occurrence of erosion. Articles in professional medical journals have discussed the possibility that patients with a lack of tissue in the retro-aortic rim might be at higher risk of erosion events; however, this relationship has not been determined.
This type of device failure has not been seen in similar devices used to treat this condition, the FDA said. There are only two approved transcatheter septal occluders on the U.S. market. Both are cleared to treat atrial septal defects (ASDs), but are frequently used off-label to treat patent foramen ovales (PFO).?The Amplatzer became the first, with FDA clearance in 2001. W. L. Gore & Associates developed the Gore Helex Septal Occluder, which gained FDA clearance in 2006. The device consists of a corkscrew-like nitinol wire frame with a Gore-Tex material covering, but does not use a metal mesh, so erosions are not seen with this device.
Read an article on how transcatheter devices are used to close holes in the heart
Complication Rates
Experts who use both devices say the overall complication rate is very low. The main complication encountered is embolization, which only occurs in about 1 percent of patients. Erosion is a less common complication, usually caused by an oversized device, for example, repairing a 1 cm hole with a 2.5 cm device.
According to published estimates, the FDA said erosion events occur in approximately 1 to 3 of every 1,000 patients implanted with the Amplatzer ASO. As of March 31, 2013, there have been 234,103 Amplatzer ASO devices sold worldwide.
To better understand how erosion impacts the performance of the Amplatzer ASO and assess potential risk factors related to the occurrence of erosion, the FDA is requiring St. Jude to conduct a study of patients recently implanted with the device. The study is designed to estimate the incidence of erosion events within seven days, one month, six months, and 12 months after the implantation of the Amplatzer ASO. The study will also compare patients who experience an erosion event to those who do not, and will identify differences in demographic, clinical, and device characteristics.
The FDA, medical device industry and echocardiography societies are collaborating to develop standardized echocardiographic imaging techniques and guidelines for ASD procedures. These techniques and guidelines will provide needed information toward understanding pre-, peri- and post-procedural anatomical characteristics of patients with atrial septal defects and the operation of the device in use.
Recommendations for Physicians
The FDA is urging physicians to review the updated Instructions for Use (IFU) for the Amplatzer ASO before implanting the device and to consider the potential for erosion when talking with patients about long- and short-term benefits and risks of treatment options.
Patients should be informed that most most people implanted with the Amplatzer ASO experience good outcomes and that erosion is a very rare event. However, those implanted with the device should be educated to seek immediate medical attention if they recognize symptoms such as chest pain, numbness, sudden weakness, dizziness, fainting, shortness of breath or rapid heartbeat.
The FDA does not recommend device removal for patients who have the Amplatzer ASO unless physicians determine it is appropriate for their particular patient. The FDA said the risks associated with device removal surgery may be equal to or greater than the risk of erosion.
If erosion is suspected in a patient, physicians should immediately report this event to St. Jude Medical and the FDA via the established adverse event reporting process in there facilities. This should include all necessary records, including implant and event images, surgical records and catheterization reports, so that the FDA has the most complete assessment of the event.
Recommendations for Patients
Patients with an ASD occluder implant who experience any symptoms of erosion you should immediately contact their doctor and go to the emergency room for an echocardiogram. Symptoms of erosion may include chest pain, numbness, sudden weakness, dizziness, fainting, shortness of breath or rapid heartbeat.
Current recommendations for follow-up with a cardiologist after Amplatzer ASO implantation include a cardiac ultrasound at the following timeframes:

ASD Closure
ASD closure devices are used in children and adults to treat an abnormal hole between the upper left and right atria of the heart. The metal device is put into place through a thin tube (catheter) inserted into a vein. This is considered a minimally invasive method for ASD closure, and is an alternative to open heart surgery.
These transcatheter structural heart repair devices, deployed in the cath lab, have largely replaced open-heart surgery as the therapy of choice. These types of septal occluders make it possible to repair atrial septal defects with better outcomes, fewer complications, faster patient recovery and lower health care costs.
For more information: www.fda.gov/MedicalDevices/Safety/AlertsandNotices/ucm371145.htm?source=govdelivery&utm_medium=email&utm_source=govdelivery
?