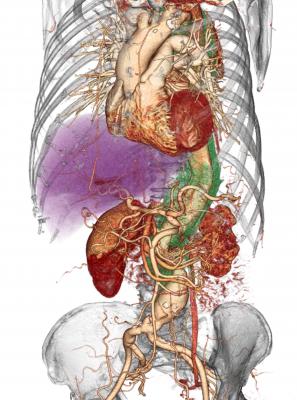 July 18, 2019 — When a patient comes to the hospital with acute type A aortic dissection (ATAAD), a tearing of the inner lining of the aorta, surgeons typically perform an immediate open repair to prevent death from aortic rupture.

However, 20 years ago, G. Michael Deeb, M.D., a cardiac surgeon at Michigan Medicine’s Frankel Cardiovascular Center, noticed some patients were still dying after their successful open repair. They thought this subset of aortic dissection patients might be succumbing to a different problem: malperfusion syndrome (MPS), which was causing organ failure due to inadequate blood supply.

In cases of malperfusion, a patient experiences inadequate blood flow to their end organs, such as the heart, because of obstruction of the aorta and its branches, which can be caused by aortic tearing. Malperfusion develops into a syndrome when this inadequate blood flow causes cell, tissue and organ death, with the consequence of functional failure in vital organs.

That led U-M cardiac surgeons to a discussion with interventional radiologists about improving aortic dissection patient outcomes. David Williams, M.D., a vascular and interventional radiologist at Michigan Medicine, brought up the idea of opening a vessel to perfuse the organ again before the cardiac surgeon performs an open repair. Yang and other surgeons continue to optimize this approach by including aggressive blood pressure control, better ICU care and carrying out earlier open aortic repairs.

In a recent Circulation study, which spanned two decades and included 597 participants with ATAAD, Yang and colleagues reported a 12 percent decrease (from 16 percent to 4 percent) in the risk of death from aortic rupture for MPS patients using this updated protocol.

“The idea was radical because immediate open repair was considered the gold standard of treatment for patients with aortic tear,” said co-author Elizabeth Norton, M.S., a student at Creighton University School of Medicine.

Yang and his team hypothesized that endovascular reperfusion (fenestration/stenting) as the first intervention before definitive operative repair would be more beneficial than upfront open aortic repair in stable patients diagnosed with both ATAAD and MPS.

Endovascular reperfusion, Norton said, involves “percutaneous access in the groin to allow vascular access without an incision, from which catheters are inserted into the artery, allowing access to the aorta and the ability to resolve the malperfusion with fenestration and stenting.

“Fenestration creates a large opening in the aortic flap that could be causing the malperfusion, allowing blood flow on both sides of the flap,” she added. “Stenting involves inserting a metal stent into the aorta and/or branch vessels to open the vessel, similar to stent placement in the coronary arteries in a heart attack; essentially opening the vessel to permit blood flow.”

“The stakes of a missed diagnosis are high, so the threshold for evaluating and, if appropriate, treating MPS in stable patients is low,” Williams said.

In this study, physicians treated 135 patients with upfront endovascular reperfusion followed by open repair. The operative mortality was 4 percent at Michigan Medicine compared to 30-40 percent reported in the literature.

After the study the research team concluded that immediate open repair is still the best strategy to prevent death from aortic rupture for the majority of patients with ATAAD. However, they report that relatively stable patients with MPS benefit from a staged approach: upfront endovascular reperfusion followed by aortic open repair after the patient recovers from malperfusion.

Compared to the traditional method of upfront open repair for every patient, Yang said this new method of care came with several advantages.

The approach resolves the arterial obstruction immediately and completely, through the skin. This is significantly less invasive than open repair and the average time to resolve the obstruction is 30 minutes.

The Michigan Medicine approach also gives borderline operative candidates with MPS time to recover and avoid pointless open repair in those with progressed organ failure, Yang said. Patients with MPS are critically ill and operative mortality has been reported to be as high as 45 percent if upfront open repair is performed.

After patients were treated with endovascular reperfusion and had recovered from MPS, the operative mortality of open repair was six to eight times lower than the expected mortality calculated from all five literature models compared in the study. The long-term survival (80 percent at five years; 63 percent at 10 years) was similar to patients with ATAAD without MPS.

In other reports, patients with MPS treated with upfront open repair had worse long-term survival rates when compared to patients without MPS.

Researchers say this new approach could change the algorithm for treating patients with acute type A aortic dissection and MPS.

“We worked to decrease the risk of rupture for MPS patients by using aggressive blood pressure control after malperfusion recovery and before their open repair surgery,” Yang said. “High blood pressure can cause rupture if the aorta is dissected because the aortic wall becomes paper thin.”

Ninety-six percent of patients either survived to discharge or underwent delayed open repair (69.5 percent) or died from end-organ failure (26.5 percent) before delayed open repair. Even after the arterial obstruction was resolved with endovascular reperfusion, the risk of dying from end-organ failure due to severe organ damage from malperfusion was approximately seven times higher than the risk of aortic rupture, proving Yang’s hypothesis.

“This method is a landmark. It’s changing lives. It will take us into the future of healthcare,” says Yang, who is already talking with other institutions about the strategy. “I want every physician to know about it.”