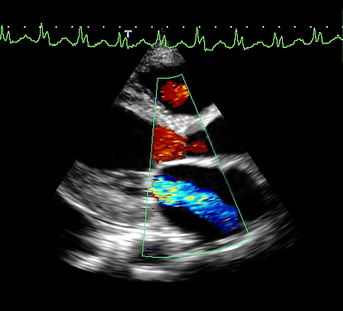 Mitral valve regurgitation showed on an echocardiogram. Image from Toshiba.

"4C Medical's mitral valve is an innovative and simple solution for a very common problem, and its unique mechanism will allow treatment of many patients not suitable for current TMVR devices," said Philippe Généreux, M.D. "30-day pre-clinical results are promising and demonstrate concept feasibility and safety, with no hemodynamic compromise, no thrombus, and mild-to-no MR as confirmed by echocardiography."

"The main challenges encountered by current TMVR devices are related to the complexity of the mitral valve anatomy and the multitude of MR mechanisms," Généreux explained. "With its supra-annular position in the left atrium, the 4C Medical device preserves the native valve apparatus and avoids all issues related to the complexity and dynamism of the mitral annulus, making the device suitable for patients independent of their MR mechanism. This unique approach promotes healthy left ventricular remodeling and healing, and eliminates the complications that are associated with current TMVR devices, such as left ventricular outflow tract obstruction, device embolization and early device fatigue failure."

Mitral regurgitation (MR) is a common heart valve disease affecting nearly 10 percent of Americans aged ≥75 years.1 MR occurs when the mitral valve leaflets do not close properly and allow blood in the left ventricle to leak back into the left atrium. It is a progressive disease and if left untreated, MR can lead to atrial fibrillation, pulmonary hypertension, heart failure and death.