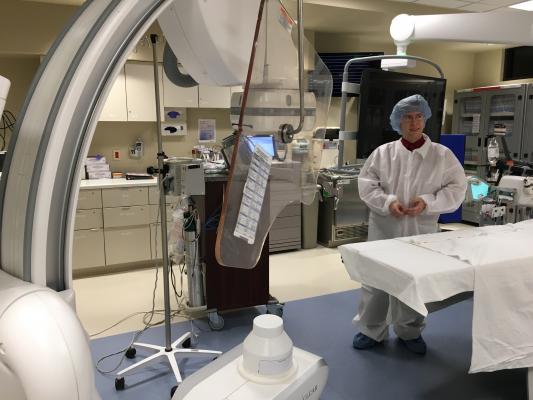 The biggest workplace concern for interventional cardiologists and cath lab staff is their daily exposure to ionizing radiation from the angiographic X-ray systems that are central to their procedures. In addition to increased cancer risks and developing cataracts, they are also worried about orthopedic issues caused by wearing heavy radiation protection aprons, which takes a toll on the spine and can lead to chronic back problems.

Interventional cardiology is a relatively new subspecialty, with the first interventional cath labs established in the late 1980s. But over the past decade, concern has risen sharply as older interventionists began showing high rates of cataracts, left-side brain cancers and chronic orthopedic back problems. For this reason, the younger generation of new interventional cardiologists are actively looking for ways to reduce their radiation exposure and eliminate the need to wear lead aprons, or at least reduce the weight.

“It is hard to say what a typical exposure is because there are so many variables,” explained Sunil Rao, M.D., professor of medicine at Duke University Medical Center, and section chief, cardiology, at the Durham VA Medical Center.

He said there are many factors that go into how much potential dose operators and staff are exposed to. This includes the case volume of the lab and what types of procedures are being performed. Rao said peripheral procedures are associated with much higher doses than coronary procedures. This is due to the use of a larger X-ray imaging field that leads to more scatter radiation, the closer proximity of the X-ray source and scatter to the operator, the use of more imaging and the longer duration of peripheral procedures.

Rao said the biggest thing that can be done to reduce dose is to start with staff education. This should include how to properly use the imaging system, what happens to the body after long-term exposure, how dose is calculated, the basic physics of X-ray radiation and how to mitigate the risks. He also stresses the need for operators to wear their badges to record data.

“You would be amazed at how many people do not wear their radiation badges in the lab,” Rao said. “May people think it is just one more thing they need to do that is not central to patient care, so it is not seen as a priority. Getting staff to understand radiation safety has been a very big challenge.”

Another issue is that interventional cardiologists often “forget” their badges outside the lab because they do not want to be told by the hospital safety monitors that they have reached the maximum monthly threshold for exposure and they cannot perform any more procedures for a while.

Find out how to reduce radiation dose in the interventional lab in the blog "14 Ways to Reduce Radiation Exposure on the Cath Lab."

Longer, More Complex Procedures Lead to More Radiation Exposure
While angiography imaging system vendors have all made great strides with new technologies that reduce the amount of X-rays needed while maintaining excellent image quality, the procedures have become more complex and are lasting longer. Transcatheter procedures now include treating chronic total occlusions (CTOs), which can take two or three hours, instead of the easier, straightforward percutaneous coronary interventions (PCIs) that had average procedure times of about 30 minutes. Peripheral artery disease (PAD) procedures in the legs also tend to be more involved and complex than coronaries. These lesions are often long and diffuse, requiring multiple stents and extra vessel preparation.

What is the Average Radiation Exposure for Interventional Cardiologists?
There have been several studies attempting to establish a baseline for average staff radiation exposure.

A 1992 study, conducted prior to the introduction of today’s lower-dose imaging systems, estimated radiation exposure received by all in-room staff in three cardiac cath labs that performed more than 15,000 procedures over a five-year period.[1] The study found head and neck areas generally receive about 20-30 millisieverts (mSv) per year. For comparison, the average background radiation exposure in most countries is about 2.4 mSv,[2] and an average computed tomography (CT) scan is about 3-8 mSv.

The study showed all staff received a body dose equivalent well below regulatory limits set at the time of 150 mSv per year, which was the recommended limit for the lens of the eye to prevent cataracts.

The physicians in training and the staff physicians were found to be more likely to reach this limit. The data also showed only a small correlation between the annual number of procedures and the annual head dose equivalent of a physician. The researchers said this is likely due to variation in the doctors’ working attitudes and techniques. The mean dose equivalent at the collar level of the interventional cardiologists was estimated to be between 0.04-0.02 mSv per procedure.

A more recent study from 2013 found interventional cardiologists have an exposure per-person, per-year that is about 10 times higher than diagnostic radiologists. The data show cumulative doses after 30 years of working life are in the range of 50 to 200 mSv, with a projected professional lifetime attributable excess cancer risk in the order of magnitude of 1 in 100.[3]

The study found the left side of the operator is exposed to between 30-100 percent more X-ray radiation than the right side because of where interventionists stand in relation to the C-arm of the angiography system. The left side of the head and less protected parts of the body like the hands can receive equivalent doses between 5-50 mSv per year.

Another study found lifetime cumulative whole-body exposure of less than 200 mSv.[4] However, life-time head exposures were estimated to be much higher because of the lack of protection, in the 1-3 Sievert (Sv) range. Radiation therapy treatments start around 2 Sv. A 1-3 Sv range to the head is a brain equivalent dose around 500 mSv, according to the study.

The concern about radiation exposure runs high among the members of the Society for Cardiovascular Angiography and Interventions (SCAI). The society conducted a study at its 2016 annual meeting where attendees were asked to undergo an eye exam cataract screening. The IC-CATARACT study,[1] published in March 2018, included 117 participants, of which 99 had radiation exposure in the cath lab. Of those 99, about 47 percent had some level of cataract development found in their eyes, said Emmanouil S. Brilakis, M.D., Ph.D., director, Center for Complex Coronary Interventions, Minneapolis Heart Institute, who helped with the study. Compared with unexposed controls in the study, he said interventional cardiologists and cath-lab staff had a higher prevalence of lens changes that may be attributable to ionizing radiation exposure. While most of these changes were subclinical, the study cited these changes are important because it can progress to clinical symptoms.

“Everyone says radiation can effect your eyes and now we have some data on this,” Brilakis said.

Cath Lab Staff Radiation Exposure Levels
A lot of information on radiation exposure in the catheterization lab is related to the doctor, not the nurses and technologists working alongside them. This is partly because the doctor usually stands the closest to the X-ray source and the patient table, and so receives the highest dose of scatter radiation. However, a 2017 study in the Journal of the American College of Cardiology (JACC) shed some light on exposures and possible ways to offer increased radiation protection for cath lab staff.[6]

The study established a baseline exposure using real-time radiation exposure data collected from nurses and technologists during 764 consecutive catheterizations. Of these, 401 procedures used standard radiation protection measures, and in another 363 cases, accessory lead shields were used to protect staff members. The shielding was associated with a nearly two-thirds reduction in radiation exposure.[6]

The study reported radiation exposure as the effective dose normalized to dose-area product (EDAP — mSv/[mGy × cm2] × 10−5). Using this method, without shielding nurses were exposed to about 1.1 EDAP and techs about 2.4 EDAP. With shielding this was reduced to about 0.5 for nurses and 1 for techs.

For more on how to improve radiation safety in the cath lab read the article "5 Technologies to Reduce Cath Lab Radiation Exposure."

2018 Consensus On Radiation Use in the Cath Lab

Related Content on Reducing Radiation in the Interventional Lab:

2. UNSCEAR 2008 REPORT Vol. I, SOURCES AND EFFECTS OF IONIZING RADIATION. United Nations Scientific Committee on the Effects of Atomic Radiation. UNSCEAR 2008 Report to the General Assembly, with scientific annexes. Issued in May 2016. http://www.unscear.org/unscear/en/publications/2008_1.html 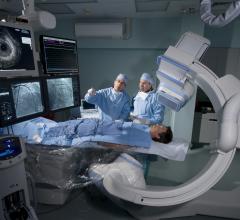