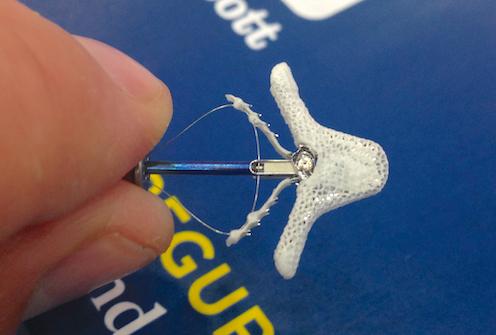 October 3, 2019 – The three-year results from the COAPT Trial demonstrated that reducing severe secondary mitral regurgitation (SMR) with the MitraClip device safely improves prognosis in selected heart failure (HF) patients. In addition, those patients that crossed over and received the MitraClip after 24 months showed the same benefits as those who received the device at the beginning of the study. Two-year data were presented at TCT 2018 and published in the New England Journal of Medicine.[1]

Findings were reported today at the 2019 Transcatheter Cardiovascular Therapeutics (TCT) scientific symposium sponsored by the Cardiovascular Research Foundation (CRF). The original findings of COAPT reported at TCT 2018 were considered a landmark, late-breaking trial and a paradigm shift in how heart failure patients with SMR are treated. Data from the trial also supported an FDA expansion of the MitraClip indication to treat these patients earlier in 2019.

“At 36 months, transcatheter mitral leaflet approximation with the MitraClip was safe, provided durable reduction in MR, reduced the rate of HF hospitalizations, and improved survival compared to medical therapy alone,” said Michael J. Mack, M.D., medical director, cardiovascular surgery at Baylor Health Care System. “In addition, those patients who crossed over and received a MitraClip experienced fewer HF hospitalizations and deaths or HFHs within 12 months than those who did not crossover, with rates comparable to patients originally assigned to the MitraClip.”

Patients with left ventricular (LV) dysfunction and HF who develop severe SMR have a poor prognosis with high rates of mortality and HF hospitalizations (HFH). Guideline directed medical therapy (GDMT), including cardiac resynchronization therapy (CRT) if appropriate has been the traditional therapy for all such patients. In the procedure tested in COAPT, the MitraClip device is attached to the mitral valve leaflets via a catheter that is then removed, leaving the clipped valve in place with less regurgitation.

COAPT was a randomized, parallel-controlled, open-label multicenter trial evaluating transcatheter mitral valve repair with the MitraClip device in patients with heart failure and moderate-to-severe or severe secondary MR who remained symptomatic despite maximally-tolerated GDMT. Between December 2012 and June 2017, a total of 614 subjects were enrolled and randomized at 78 centers in the United States and Canada. Per protocol, subjects randomized to GDMT were not allowed to crossover to the MitraClip prior to 24 months but were permitted to do so after 24 months.

The goal of the present study was to describe the three-year clinical outcomes of patients enrolled in the COAPT trial, including those who crossed over to MitraClip (ITT) and analyze the impact of MitraClip crossovers in patients assigned to GDMT alone. The latest data showed that the primary effectiveness endpoint of all hospitalizations for HF within 36 months was 220 for the MitraClip plus GDMT arm versus 378 in the GDMT alone arm (HR [95% CI] = 0.49 [0.37, 0.63], P=0.00000006). In addition, device-related
complications at 36 months was 8.7% (1.4% related to the device and 7.4% related to progressive heart failure). All-cause mortality for all patients including crossovers at three years was 42.8% for MitraClip plus GDMT compared to 55.5% for GDMT alone (HR [95% CI] = 0.67 [0.52, 0.85] P=0.001).