Emblem Subcutaneous ICD Safe and Effective for Majority of Patients 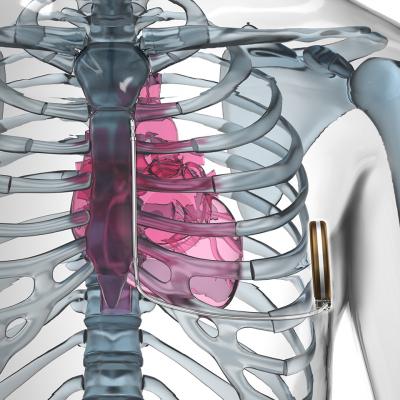 May 13, 2019 — Boston Scientific announced acute results from the UNTOUCHED study evaluating safety and efficacy of the Emblem subcutaneous implantable defibrillator (S-ICD) system for primary prevention of sudden cardiac death specifically in patients with a left ventricular ejection fraction (LVEF) ≤35 percent. This is the most common population to be indicated for ICD therapy. The results demonstrated S-ICD therapy had a complication-free rate of 95.8 percent at 30 days post-procedure and high conversion efficacy (99.2 percent) of induced ventricular fibrillation, rates comparable to those seen in previous S-ICD and transvenous implantable cardioverter-defibrillator (TV-ICD) studies.

The data were presented during a late-breaking clinical trial at Heart Rhythm 2019, the Heart Rhythm Society's 40th Annual Scientific Sessions, May 8-11 in San Francisco. The analysis was also published online in the Heart Rhythm Journal.[1]

The UNTOUCHED study authors also reviewed procedure techniques and 30-day outcomes in patients implanted with the Emblem S-ICD System and found that the majority (69 percent) of procedures were performed using a two-incision technique. The two-incision technique data demonstrated a mean implant time of 55.8 minutes, which was 8 minutes faster than the mean 63.8 minutes for procedures that leveraged a three-incision implant technique, with comparable complication and conversion success rates.

"We found that the complication rate within this primary prevention population was as low as in prior S-ICD registries, despite the patients having much lower LVEF, more hypertension and diabetes – underscoring that sicker patients do well with this device for the prevention of sudden death," said Lucas V.A. Boersma, M.D., Ph.D., study principal investigator and electrophysiologist at St. Antonius Hospital, the Netherlands. "These acute outcomes also validate the advantages of the two-incision implant technique, which has continued to gain worldwide adoption in the last few years."

Watch the VIDEO: Overview of Subcutaneous ICD Technology, an interview with Boersma.

The global, prospective, non-randomized study evaluated data from 1,116 patients with a low LVEF, the majority of whom (54 percent) had ischemic heart disease.

The final results of the UNTOUCHED study, including an analysis comparing inappropriate shock rates of the S-ICD to rates found in previous TV-ICD studies, will be reported after 18-months of patient follow-up.