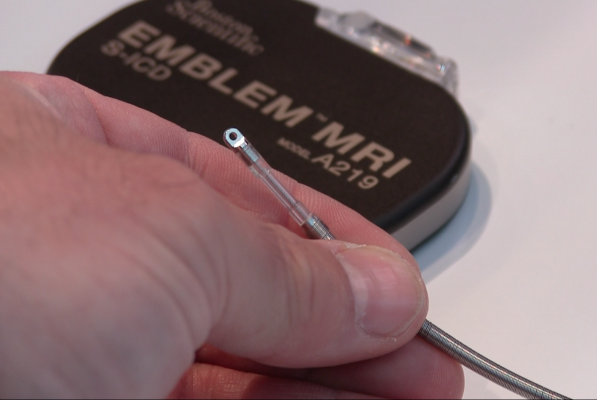 May 12, 2017 – Results from the U.S. post-market approval study evaluating “real-world” patients implanted with the Boston Scientific Subcutaneous Implantable Defibrillator (S-ICD) System is the largest S-ICD study to date. Data collected from the study were presented during a late-breaking clinical trial at Heart Rhythm 2017, the Heart Rhythm Society’s 38th Annual Scientific Sessions in Chicago, and demonstrated that physicians are implanting the S-ICD System largely for patients typically treated with transvenous implantable cardioverter defibrillators (TV-ICD) as well as for sicker patients while achieving a high success rate and low complication rate.

Watch a VIDEO showing how to implant the S-ICD system.

The non-randomized registry, initiated in 2012 after the S-ICD System received U.S. Food and Drug Administration approval, included 1,637 patients implanted with the device at 86 U.S. medical centers. Nearly two-thirds of the patients evaluated in the study were primary prevention patients with a low ejection fraction, which represents the highest proportion of patients that are implanted with ICD devices. Additionally, more than half of the patients had comorbidities such as heart failure and hypertension, and more than 13 percent were on dialysis for end stage renal disease.

“Beyond the positive clinical outcomes, we are also seeing advancements in procedural techniques as physician experience and confidence continue to build,” said Kenneth Stein, M.D., senior vice president and chief medical officer, Global Health Policy and Rhythm Management, Boston Scientific. “Physicians are implanting over half of the devices with two surgical incisions rather than the standard three incisions and avoiding use of general anesthesia in more than one-third of patients.”

To further develop the clinical body of evidence in support of the S-ICD System, Boston Scientific initiated  a worldwide study called the Multicenter Automatic Defibrillator Implantation Trial with Subcutaneous Implantable Cardioverter Defibrillator (MADIT S-ICD) last month. The study will evaluate the survival benefit of  patients treated with the Emblem MRI S-ICD System – the latest generation S-ICD system – who are aged 65 and older with a history of prior heart attack, diabetes and moderately reduced left ventricular ejection fraction.