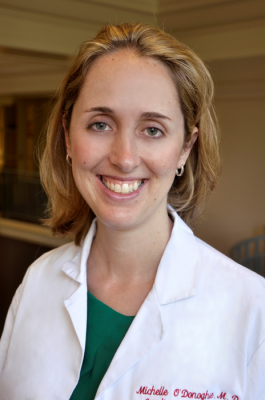 September 8, 2022 — A clinical trial led by investigators from Brigham and Women’s Hospital has found that the long-term use of the cholesterol lowering drug evolocumab was safe, well tolerated, and led to further reductions in the risk of cardiovascular events compared to shorter treatment. Findings from the trial, known as FOURIER open-label extension (OLE), sponsored by Amgen, were presented at a Hot Line session at ESC Congress 2022 by the study’s principal investigator Michelle O’Donoghue, MD, MPH, a senior investigator of the TIMI Study Group in the Division of Cardiovascular Medicine. More than 6,000 participants from the parent trial were enrolled in FOURIER-OLE. During the extension period of the trial, patients received open-label subcutaneous injections of the PCSK9 inhibitor evolocumab regardless of whether they were originally randomized to receive the drug or the placebo. Participants were followed for a median of five years and, therefore, some patients were treated with evolocumab for more than eight years over the course of the parent and extension phase. Those originally randomized to receive evolocumab had a 15 percent lower risk of cardiovascular death, myocardial infarction (MI), stroke, hospitalization for unstable angina or coronary revascularization; a 20 percent lower risk of cardiovascular death, MI or stroke; and a 23 percent lower risk of cardiovascular death during OLE compared to those who were originally randomized to receive the placebo.

“To date, most clinical trials of PCSK9 inhibitors like evolocumab have only looked at its impact over two to three years, but most patients will be on a lipid-lowering therapy for many years,” said O’Donoghue. “Our study has found that long-term use of evolocumab was safe and led to further reductions in cardiovascular events among those who were started on the drug earlier, providing further support for guidelines recommending lipid-lowering therapy with PCSK9 inhibitors.”