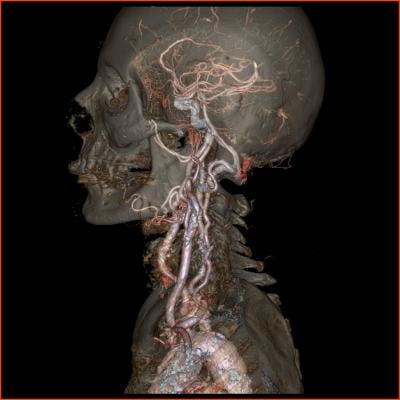 October 31, 2018 — Recent statin and medication advances have led some researchers to suggest surgical treatments for carotid stenosis should be limited to symptomatic patients ­–  primarily those who have already had a stroke or transient ischemic attack (TIA). However, a new study published in the Journal of Vascular Surgery questions whether medical therapy is a sufficient stroke-reduction strategy.1

In the study, only 35 percent of stroke patients were receiving both statin and antiplatelet agents prior to their event, suggesting that asymptomatic carotid disease is unrecognized in many individuals, noted lead researcher W. Darrin Clouse, M.D., of Massachusetts General Hospital (MGH).

“And the first manifestation of their disease,” he wrote, “could be the occurrence of a stroke.”

Direct comparison between modern antiplatelet/statin regimens and carotid revascularization is ongoing in the CREST-2 Trial, but these results are years away from confirmation.

As reported in the November edition of the Journal of Vascular Surgery, researchers from MGH led by Clouse and first author Derek Klarin, M.D., assessed the atherosclerotic risk factor profiles, anatomic features and clinical outcomes of previously asymptomatic patients admitted after a carotid-related stroke. Records from 3,381 patients admitted with an ischemic stroke between 2005 and 2015 were reviewed, revealing 219 patients (7 percent) were due to carotid disease.

Demographics of those with strokes secondary to carotid disease included:

Carotid disease in these stroke patients was noted to be:

Seventy-one percent of patients were determined to have had a moderate-severe stroke.  Those receiving both antiplatelet and statin therapy were less likely to have this degree of stroke (44 percent versus 78 percent).

“Nearly one-half of the patients we identified presented with complete internal carotid occlusion at time of their first symptoms, largely making them ineligible for stroke-risk reduction with CEA or stenting,” noted Clouse.  “The effect of this inability to salvage carotid perfusion in patients with occlusion should be included in the assessment of risks and benefits associated with asymptomatic carotid revascularization.”

Clouse added, “Taken together, these data suggest that medical therapy alone is unlikely to completely extinguish stroke risk in patients with significant carotid bifurcation atherosclerotic stenosis. The proper identification of stenosis, medical therapy institution, proper surveillance for progression and revascularization are all important in minimizing progression to carotid-related stroke.”

The authors also note that of the stroke patients, only 7 percent had been screened, but 35 percent had been receiving both statin and antiplatelet agents, suggesting that some atherosclerotic disease had been detected.

While advances have been made in the medical treatment of carotid atherosclerosis, this analysis of stroke patients argues strongly for the continued role of revascularization pending the results of the CREST-2 Trial.