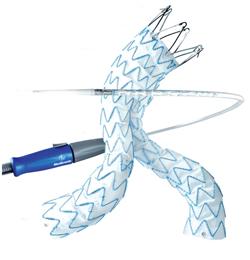 An abdominal aortic aneurysm (AAA) is a weakening or bulge in the segment of the aorta, the body’s main artery, which crosses through the abdomen. AAA is often called a “silent killer” because it rarely causes apparent symptoms until rupturing, which usually results in the patient’s death.

Developed in collaboration with more than 250 physicians from around the world and now available in most European countries, the new system encompasses the Endurant stent graft platform while adding new design features that enhance the device’s ease of use.

·         Beginning at the point of access, the new lower-profile delivery system –– with 35 percent extended hydrophilic coating for enhanced access to challenging anatomies –– allows the 28 mm-diameter bifurcated segment (the most commonly used size) to fit inside an 18 French outer diameter catheter (down from 20 French with the original device).

·         Finally, the radiopacity of the distal end of the bifurcated segment’s contralateral gate has been improved to enhance visibility and aid with limb insertion, placement and deployment.

In the United States, the Endurant II AAA stent graft system is expected to receive approval from the U.S. Food and Drug Administration (FDA) in 2012.