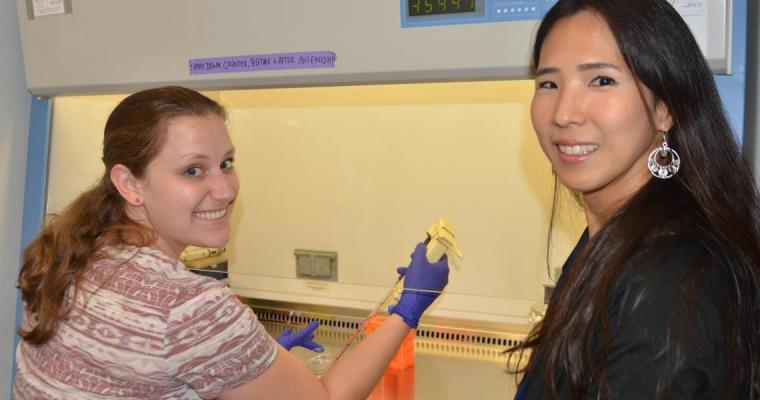 August 4, 2017 — In petri dishes in her campus laboratory at New Jersey Institute of Technology, Alice Lee is developing colonies of cardiac cells, formed into chambers, that pump and contract like a human heart. Derived from stem cells, these primitive organs will help her achieve a research milestone: to observe in microscopic, real-time detail how the heart repairs itself after injury.

She must first induce an “attack” by damaging the tiny proto-hearts with a frozen rod, thus mobilizing sequential, cell-based repair crews that clear the injury site of debris, and then in a second phase, recruit materials and tools from the neighboring tissue to mend the damage.

“By developing diseased-tissue models, we’re hoping to gain insights that will allow us to improve diagnoses and therapies for cardiac diseases,” said Lee, an assistant professor of biomedical engineering. “These are techniques that cannot be tested in patients.”

Earlier in 2017, she received a five-year Faculty Early Career Development (CAREER) Award from the National Science Foundation (NSF) to advance understanding of the underlying mechanisms of heart tissue repair by cell-based therapy. NSF CAREER awards, described by the agency as among its most prestigious, are highly selective grants that support early-career researchers with “the potential to serve as academic role models in research and education and to lead advances in the mission of their department or organization.”

In awarding her the grant, the NSF acknowledged “major hurdles” to date in developing cell-based therapies – restoring damaged tissue by deploying transplanted stem cells to the injury site – that derive in part from limited knowledge of the biological mechanisms of the transplanted cells. Existing models have focused almost exclusively on mimicking the healthy cardiac microenvironment with the goal of providing a living surgical replacement. In order to develop alternative therapies, the agency deems her model both novel and necessary.

“What is unique about these experiments is the opportunity they provide to see how different cell types in the heart interact during the repair process in the immediate aftermath of a heart attack – the period that offers the best chance for successful cell-therapy interventions,” Lee noted. “Better understanding of diseased tissue can help us to predict how stem cells used in cell-based therapy will integrate and function in the body.”

Medical researchers have had little success with these therapies so far, because the injected cells drift away from the injury and fail in their task to rebuild tissue. “They don’t stick to the site, and eventually they die,” Lee said.

Unlike most biological tissues, heart cells do not regenerate or proliferate. Following injury, the damaged tissue is not so much restored as slightly reconfigured. It becomes stiffer and less functional.

Lee is focusing on the first two stages of repair: an initial phase of about seven days during which the body sends out macrophages — inflammatory cells that clear the site by engulfing and consuming the destroyed tissue — followed by a weeks-long proliferation phase, in which cardiac fibroblast cells (connective cells) become activated and migrate to the region of dead tissue to synthesize new extracellular matrix – the structural molecules that support heart cells – and remodel the tissue.

“We’re trying to figure out what biological mechanisms will guide the stem cells used in therapy to the right place and foster their growth there,” Lee explained. She and Pamela Hitscherich, a Ph.D. student in her laboratory, are testing various scenarios in which the heart cells – cardiomyocytes – interact in different sequences with the inflammatory repair cells.

A crucial element of this process is ensuring there are enough blood vessels to supply the tissue with the nutrients and energy it needs to grow.

“In order to build what’s physiologically correct, we must incorporate vasculature, a functioning network of vessels to feed the new organ cells and permit their growth, and we are still searching for the best strategy to create this tissue,” she said. “It’s difficult to do outside of the body without proper blood flow and signals from other cells and tissues.” She is currently investigating the role of tissue-specific vascular cells and improving a device she created to host vessel-formation experiments.

Lee said it has been difficult to fully understand the healing process because of the body’s complexity.

“In the case of a heart attack, a series of events, including inflammation, proliferation and remodeling, occur at the damaged heart region,” she explained. “That’s why the in vitro model is critical. It’s a simplified set-up that allows us to study different parameters independently and tease out the problem.”

“We want to know, for example, what components in heart tissue prompt the stem cells to adhere and when is the best time to inject them,” she added. “We can also develop newer therapeutic interventions to help these stem cells home in and ultimately restore the heart function.”