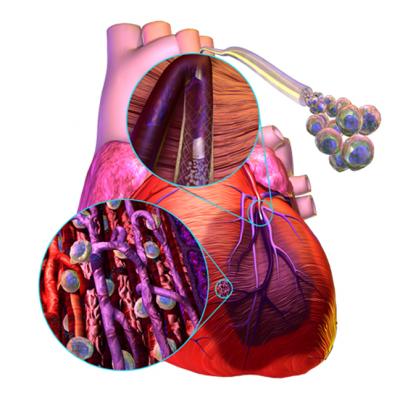 A demonstration of how stem cells can be injected into the area of an infarct to help restore cardiac function with the growth of new heart muscle following a heart attack.

For years researchers have experimented with stem cells in attempts to regrow myocardium in patients who suffer permanent tissue damage from myocardial infarction. A handful of companies are pushing forward with clinical trials of their technologies in an effort to show this futuristic concept has promise.

Several sessions discussed cell therapies in April at the American College of Cardiology (ACC) 2011 meeting. Speakers said stem cells can be derived from a variety of sources, including cardiac tissue, human embryos, placentas, bone marrow and adipose tissue. Other forms of regenerative cells being researched include progenerator cells and platelet-rich plasma.

“Cell therapy is no longer science fiction,” said Andre Terzic, M.D., Ph.D., Mayo Clinical Center for Regenerative Medicine, Rochester, Minn. However, while the technology exists to collect stem cells and deliver them to patients, research is still needed in cell retention.  Currently, only 5-10 percent of stem cells injected into patients are retained in the tissues they are meant to repair, which he said greatly reduces their effectiveness.

“You can’t expect only 60,000 cells to replace the function of the millions of cells that were lost in an infarction,” Terzic said.

His current research is focused on which proteins help increase cell uptake in damaged tissues.

“The heart is a regenerative organ and we clearly should try to maximize this repair process nature has provided for us,” said Andreas Zeiher, M.D., University of Frankfurt, Germany.

He agrees meta-analysis of several trials of progenerator cells has shown only moderate improvement of about 3.7 percent increase in left ventricular ejection fraction. However, he said the technology shows promise and if any increase in cardiac function can be reclaimed, it may help prevent or delay the decline seen in heart failure patients.

The cardiac myocytes do not always persist in these treatments, but when they do, he said patients see sustained heart function improvement. Zeiher also said this leads to lower rates of death, ICD implantations and revascularization.

“Stem cell therapy is kind of a niche in cardiology, but it does not have a broad base yet because of the lack of clinical evidence,” said Marc Hedrick, president and CEO, Cytori Therapeutics. His company has developed a therapy using adult stem cells derived from the patient’s own fat tissue.  “Overall, the results have been mixed.”

Hedrick said about 5 percent of adipose tissue is composed of stem and progenerator cells, which he says is two or three times greater than bone marrow. After fat tissue is removed using a specialized syringe, Cytori’s Celution technology uses a multi-step process to separate stem cells and progenerator cells using processes involving buoyancy, centrifuge and filtration. The purification process takes about an hour.

The stem cells are then injected into the patient via cardiac catheterization using one of two methods, depending if the patient is suffering from chronic or acute heart disease, Hedrick said. For an infarct, a catheter is guided into the left ventricle, and  about 15 needle catheter injects are made into the infarct tissue.  Hedrick said the procedure uses an electrophysiology (EP) cardiac mapping process to determine the exact location and boundaries of the infarct. The catheter is navigated and the precise placement of the injections are guided using EP mapping and cardiac ablation navigation software.

For patients with chronic ischemia, he said stem cells can be released directly into the affected coronary vessel.

Cytori has conducted two small clinical trials in Europe, which totaled 41 patients. Hedrick said the results were “highly statistically relevant.” Results from the APOLLO study were reported at the International Conference on Cell Therapy for Cardiovascular Disease in February. The study results show tissue death following a heart attack was reduced from 32 percent down to 15 percent.

APOLLO co-principal investigator Henricus J. Duckers, M.D., Ph.D., head of molecular cardiology, Thoraxcentre, Erasmus University Hospital, Rotterdam, the Netherlands, said the therapy was associated with a significantly lower incidence of ventricular tachyarrhythmias (VT). A total of three VT episodes were reported in the treated group as compared to 10 in the control group. The analysis of Holter recordings also showed lower incidence of premature ventricular contractions (PVC).  Five PVCs per treated patient, per day, were reported whereas in placebo-treated patients, the number of PVCs reported per patient, per day, was 72.

With these data, Cytori hopes to gain CE mark approval in Europe by early 2012 as the first stem cell treatment for acute myocardial infarction patients. Hedrick said the company has also committed to conducting a larger, 300-patient study to collect further evidence of the treatments efficacy.

“Even with a patient on maximum medical therapy on their Bataan death march toward a heart transplant, we can extend out the time before they need to be on that list by 18 months,” Hedrick said.

The cost to care for a patient in advanced heart failure can be up to $150,000 annually. Hedrick argues stem cell therapy holds promise as an alternative that would be much less expensive and could significantly reduce mortality.

He said PCI can reduce infarct size by 5-10 percent, but he hopes stem cells may reduce the damage further.  “We want to reduce the heart attack size by half,” Hedrick said. “If you can change the size of a heart attack down by 50-75 percent, that is significant.”