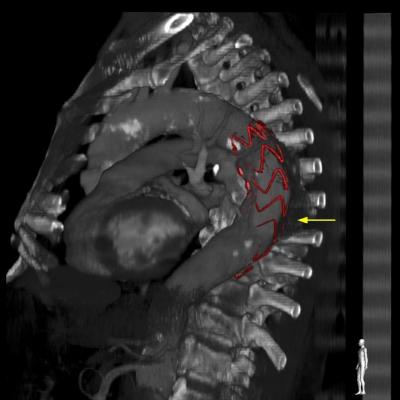 May 23, 2017 — Significant success has been achieved in treating complex proximal aneurysms using a combination of fenestrated and branched-graft devices, based on a report of prospectively studied patients with complex aortic aneurysm in the May edition of the Journal of Vascular Surgery.

At a follow-up averaging nine months, they had no ruptures or sac enlargement, but there was an 18 percent need for endovascular re-intervention.

Aortic aneurysm remains a significant cause of mortality and morbidity, particularly in aging patients. While most aneurysms involve the abdominal portion of the aorta (abdominal aortic aneurysm, or AAA), some develop aneurysmal degeneration more proximally involving the paravisceral and thoracic aorta. Repair of these aneurysms, traditionally performed by open surgical approaches, is considerably more complex with increased rates of death, dialysis and paraplegia following repair.

Endovascular therapies for more proximal aortic aneurysm are evolving and mainly involve the use of fenestrated and branched-graft designs. Complications specific to endovascular repair include loss of branch vessel patency (either intra-operative or in follow-up) and endoleak.  It is hoped that collaboration between the advanced vascular surgical teams performing these highly complex procedures and companies developing the products used for implantation will continue to drive success for patients with aortic aneurysm.

While these results are outstanding compared to open surgical treatment, Oderich noted that, “Follow-up is still too short to draw any conclusions about time-dependent outcomes, and it is likely that rates of reinterventions, vessel patency and endoleaks will be affected during longer follow-up.”