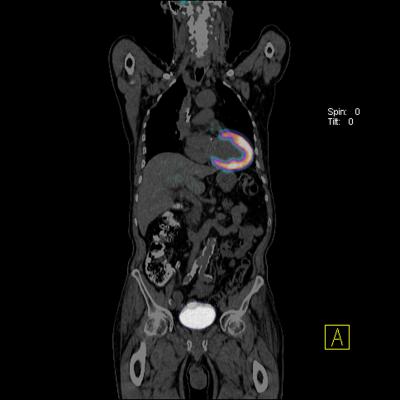 July 25, 2017 — Using a new nuclear imaging technique that can diagnose cardiac sarcoidosis much more accurately than traditional tests, researchers from the University of Illinois at Chicago have found the disease affects other organs in 40 percent of known patients with cardiac sarcoidosis. The findings are published in the Journal of Nuclear Cardiology.

Positron emission tomography (PET) scans and computed tomography (CT) scans, as well as scans that combine information from each, have been used in the diagnosis of cardiac sarcoidosis, but the results are often unclear and hard to interpret, and lead to many false negatives.

A new combined PET-CT scan technique developed at UIC incorporates a 72-hour high-fat, low-sugar diet before images are taken. The new scan provides much clearer images of sarcoidosis and lets physicians better detect cardiac sarcoidosis. In a previous UIC study, researchers were able to diagnose cardiac sarcoidosis much more accurately and could diagnose cases that would not have been picked up using the usual 24-hour high-fat, low-sugar protocol normally prescribed before the combined PET-CT scans.

In the current study, the researchers used the new protocol to investigate the relationship between the presence of cardiac sarcoidosis and sarcoidosis in other parts of the body.

"We wanted to know if patients being evaluated for cardiac sarcoidosis would benefit from more thorough imaging of the body beyond the usual torso scan, using this new technique," said Nadera Sweiss, M.D., professor of rheumatology in the UIC College of Medicine and an author on the paper.

The researchers performed full-body (nose to knees) PET-CT scans of 188 patients who followed the 72-hour pre-test diet between Dec. 2014 and Dec. 2015 at the University of Illinois hospital, UI Health. Of the 20 scans that were positive for cardiac sarcoidosis, eight, or 40 percent, revealed sarcoidosis in other parts of the body.

"This study indicates that more extensive, full-body scans of patients with known cardiac sarcoidosis can uncover secondary sites of the disease in a significant number of patients," said Sweiss, who is also director of UI Health's Bernie Mac Sarcoidosis Translational Advanced Research (STAR) Center. "Knowing there is disease in organs other than the heart changes the way we approach treatment — it allows us to more accurately stage the disease and treat it accordingly."

Sweiss cautioned that the technique for detecting sarcoidosis outside and within the heart needs to be further tested, and its ultimate contribution to outcomes in patients with cardiac sarcoidosis will need to be evaluated.