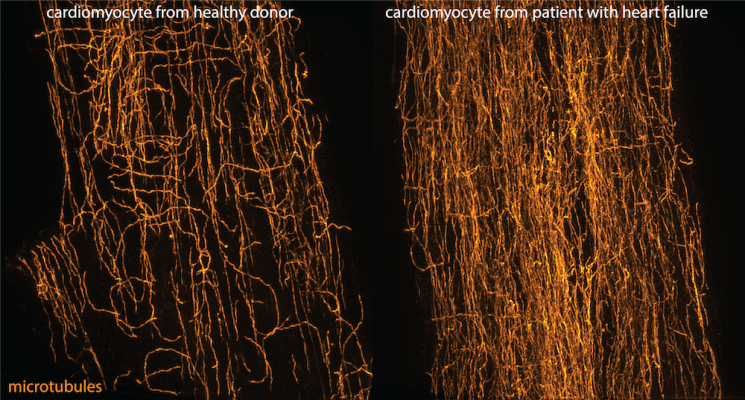 Microtubules in heart cells from a healthy patient (left) and from a patient with heart failure. The dense network of detyrosinated microtubules impedes the motion of the failing heart cell during the heart beat. Credit: Ben Prosser lab, Perelman School of Medicine, University of Pennsylvania

June 25, 2018 — New research finds changes in cellular struts called microtubules (MT) can affect the stiffness of diseased human heart muscle cells. Furthermore, reversing these modifications can lessen the stiffness and improve the beating strength of these cells isolated from transplant patients with heart failure, found researchers from the Perelman School of Medicine at the University of Pennsylvania. This Nature Medicine new study is a continuation of research conducted two years ago on how MTs are involved in regulating the heartbeat.

“These findings provide compelling evidence from human samples for a new therapeutic target for heart disease,” said senior author Ben Prosser, Ph.D., an assistant professor of physiology. The Penn investigators aim to develop therapies that seek out the damaged MTs to reverse their harmful influence.

By suppressing impaired MTs, the team improved heart muscle cell function in damaged human cells. Normally, MTs of the cell’s inner support system have diverse structural and signaling roles. Alterations in this network have been suggested to contribute to heart disease. Recent studies suggest that chemical changes to the MTs, called detyrosination (the removal of a tyrosine chemical group), control the mechanics of heart beats. Detyrosinated MTs provide resistance that can impede the motion of contracting heart muscle cells.

The Penn team used mass spectrometry and mechanical tests of single heart muscle cells to characterize changes to the MT network and its consequences for normal heart function. Analysis of tissue from the left ventricle of heart transplant patients revealed a consistent upregulation of proteins that leads to the stiffening of MTs. Using super-resolution imaging, the team also saw a dense, heavily detyrosinated MT network in the diseased heart muscle cells, which is consistent with increased cell stiffness and decreased ability to contract. Proper cell elasticity and contraction is crucial for normal circulation throughout the body.

Past clinical data from Penn showed a direct correlation between excess MT detyrosination and a decline in heart function among patients with hypertrophic cardiomyopathy (HCM). HCM is a condition in which thickened heart muscle can cause problems in maintaining proper blood pressure levels and flow of blood through the heart.

The team compared human heart tissue donated from heart transplant patients to normal heart tissue from other donors, obtained from work with transplant cardiologist and coauthor Ken Margulies, M.D., a professor of cardiovascular medicine. Cells from diseased hearts have more MTs, and these MTs have more detyrosination. This process correlated with impaired function within this patient population in that their whole hearts, before the transplant, had a lower ejection fraction that correlated with greater detyrosination. Ejection fraction, an indicator of heart health, measures the amount of blood pumped out of ventricles with each contraction.

The team is now working on ways to target only heart muscle cell MTs. They are refining gene therapy approaches with the Penn Gene Vector Core to deliver an enzyme to the heart that reverses detyrosination in heart muscle cells.