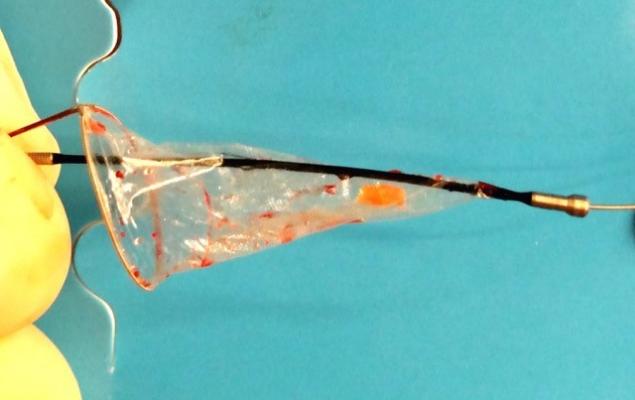 August 23, 2017 — PinnacleHealth is the first hospital in Pennsylvania and one of the first 10 in the country to introduce new technology shown to help protect patients from the risk of stroke during transcatheter aortic valve replacement (TAVR).

Minimally invasive TAVR is proven effective in treating aortic stenosis without open heart surgery for patients at too high of a risk for surgery. However, during TAVR, calcium deposits from the heart valve or tissue can be dislodged and may travel to the brain, which can create a stroke risk. Based on clinical trial results and major TAVR registry data, the reported risk of stroke for TAVR patients varies between 1-5 percent1-4.

PinnacleHealth is implementing the Sentinel Cerebral Protection System, the first U.S. Food and Drug Administration (FDA)-cleared device available in the U.S., to capture and remove this embolic debris before it reaches the brain. The device has been shown to reduce strokes by 63 percent during the procedure and in the first 72 hours post-procedure, when most strokes occur.

In the U.S. clinical trial of the technology, the device captured debris in 99 percent of TAVR cases, with no added risk for the overall procedure. The Sentinel device is inserted through the catheter before the TAVR device and comes out after the valve is deployed. It is shaped like a butterfly net, collapsing around the debris and allows the debris to be removed from the body after the procedure.

“Any stroke is one stroke too many,” said Hemal Gada, M.D., MBA, medical director of structural heart at PinnacleHealth CardioVascular Institute.

“We are proud to be on the vanguard of offering the most advanced medical technology to keep our patients safe and value the added layer of protection this device brings to our patients,” said Mubashir Mumtaz, M.D., FACS, FACC, chief of cardiothoracic surgery and surgical director of structural heart at PinnacleHealth CardioVascular Institute.