In largest study to date, severe cases of prosthesis-patient mismatch were associated with higher risk of death and hospital readmissions 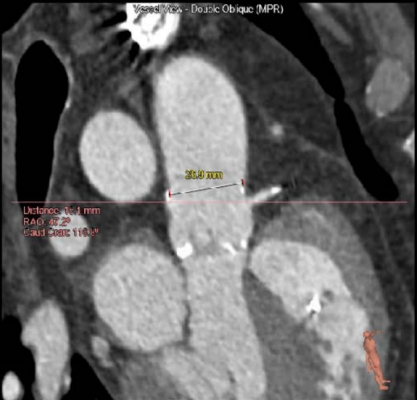 October 3, 2018 — A high number of patients in a study who underwent transcatheter aortic valve replacement (TAVR) experienced severe and moderate cases of prosthesis-patient mismatch (PPM), meaning the implanted heart valve is too small for the patient, which can lead to inadequate blood flow. The research team from Penn Medicine also found that the risk of death and of heart failure readmissions were 19 percent and 12 percent higher, respectively, after one year as compared to patients without severe PPM.

Results of the study were presented as a late-breaking abstract at the Transcatheter Cardiovascular Therapeutics (TCT) 2018 meeting, Sept. 21-25 in San Diego, and simultaneously published online in the Journal of the American College of Cardiology.[1]

“This is an important contemporary snapshot of what’s happening in the real world with commercial TAVR procedures,” said the study’s lead author Howard C. Herrmann, M.D., FACC, MSCAI, the John W. Bryfogle Professor of Cardiovascular Medicine and Surgery at Penn’s Perelman School of Medicine and director of Penn Medicine’s Interventional Cardiology Program, who presented the results at TCT. “This is the first study that is large enough to demonstrate meaningful data associated with PPM for a relatively new procedure like TAVR. Based on these findings, PPM is an important problem in this population, one that deserves greater awareness among operators. And being aware of it is the first step in trying to prevent it.”

TAVR was approved by the U.S. Food and Drug Administration (FDA) in 2011 for the treatment of aortic stenosis, a narrowing of the heart’s aortic valve. It has revolutionized valve replacement options for patients with this disease who are too sick or too high risk for surgical (open-heart) valve replacement (SAVR). This minimally invasive, catheter-based approach allows physicians to replace the aortic valve without need to remove the old, damaged one.

Of the 62,125 patients who received TAVR in the United States between 2014 and 2017 and who were evaluated, researchers found 12 percent experienced severe PPM, while 25 percent had moderate PPM. Researchers collected and analyzed patient data from the U.S. STS/ACC Transcatheter Valve Therapy (TVT) Registry, which tracks all commercial procedures performed in the United States. To further study patient outcomes, the authors linked patients in the U.S. STS/ACC TVT registry to Centers for Medicare & Medicaid Services’ administrative claims data for 37,470 of their patients. After 30 days, patients with severe PPM had higher rates of heart failure hospitalization, stroke, and death.

Historically, PPM has been associated with worse outcomes after SAVR, however, less has been known about the incidence, outcomes and predictors of PPM in TAVR patients. Past studies have been small, with limited follow up, and some from single centers — combined, they only represent 4,000 patients — and measurement techniques for the valve opening have been inconsistent.

PPM is a mismatch of the blood flow dynamics of the prosthetic valve and the amount of blood the heart needs to pump to the rest of the patient’s body. For example, having too small of a valve in a person with a large body surface area (height and weight) affects their ability to get enough blood flow when they exercise. In previous studies, severe PPM in both SAVR and TAVR patients have been associated with higher risk of death and hospital readmission, decreased exercise abilities and a higher rate of valve deterioration over time.

The authors identified several predictors of PPM, including patients with a smaller valve prosthesis, those who had a larger body surface area, or patients who are female or younger.

“Severe PPM occurs frequently after TAVR procedures, and it results in worse outcomes, even after a short period of one year,” Herrmann said. “Now that we’re more aware of this, we need to look at strategies and compare devices and techniques in future studies to determine what will help us best limit this risk or avoid it in the future.”