These changes, seen in a mouse model, are a likely proteome signature for reductive stress cardiomyopathy. About one in six heart failure patients shows reductive stress, according to a 2018 clinical study 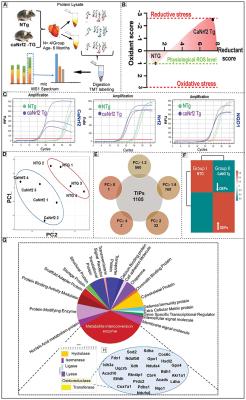 August 8, 2022 — Two years ago, University of Alabama at Birmingham researchers and colleagues reported that reductive stress — an imbalance in the normal oxidation/reduction, or redox, homeostasis — caused pathological changes associated with heart failure in a mouse model. This was a follow-up to their 2018 clinical study that found about one in six heart failure patients shows reductive stress.

Now they have extended their description of changes caused by reductive stress to describe changes in the proteome of heart cells in mice, disclosing a likely proteome signature for reductive stress cardiomyopathy. A proteome is the complement of proteins expressed in a cell or tissue.

They found about 560 proteins were differentially expressed, and 32 proteins were significantly altered — 20 being upregulated and 12 downregulated. The reductive stress mouse model is caused by a constitutively active NRF2, the redox sensor that maintains redox homeostasis in cells.

Through gene ontology and pathway analysis, the researchers found that the majority of the differentially expressed proteins are involved in stress-related pathways such as antioxidants, NADPH, protein quality control and others. Proteins involved in mitochondrial respiration, lipophagy and cardiac rhythm were dramatically decreased in the reductive stress hearts.

The most significantly changed subset of proteins was in the glutathione family. Glutathione is an antioxidant, active in redox homeostasis, that can exist in a reduced or oxidized form.

Surprisingly, the levels of about half of 104 altered proteins were found not to correlate with levels of their messenger RNAs, the gene message that is read by ribosomes to make a protein. The reason for this asynchrony is not known.

In association with the altered proteome, the reductive stress mice displayed pathological cardiac remodeling. This cardiomyopathy makes it harder for the heart to pump blood, and it can lead to heart failure. The researchers also found post-translational modifications such as oxidation, N-ethylmaleimide, methionine loss and acetylation in the reductive stress hearts.

“Under reductive stress, we observed downregulation of several myocardial adaptation or rescue pathways and upregulation of pathophysiological processes, which are associated with reductive stress cardiomyopathy over time,” Namakkal-Soorappan said. “Thus, our results provide a rationale to develop personalized antioxidant therapeutic strategies to avoid reductive stress-mediated proteome alterations in humans.”

The report, “Tandem Mass Tagging based identification of proteome signatures for reductive stress cardiomyopathy,” is published in Frontiers in Cardiovascular Medicine.