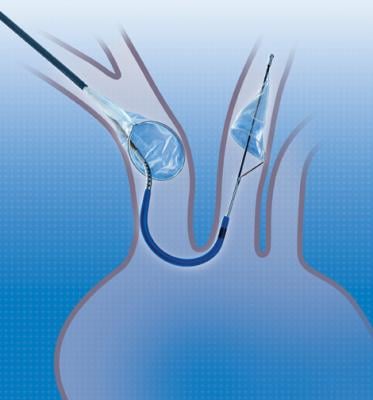 February 19, 2018 — Claret Medical announced that since U.S. Food and Drug Administration (FDA) clearance in June 2017, its Sentinel Cerebral Protection System has been adopted by 50 U.S. centers as part of its controlled rollout. The company said that some institutions have adopted the device as an emerging standard of care in the U.S. to protect patients from the risk of stroke by capturing and removing debris associated with transcatheter aortic valve replacement (TAVR) before it travels to the brain. The novel system has been shown to significantly reduce the risk of stroke in the first three days after TAVR by more than 60 percent, according to Claret Medical.

“During the TAVR procedure, we must remember that we liberate a wide spectrum of debris from the hostile aortic arch and the aortic valve complex due to the atherosclerotic nature of this disease. Some of the liberated debris is several millimeters in size, and can travel to the brain and cause ischemic brain damage or stroke, as demonstrated by outcomes from the SENTINEL U.S. and SENTINEL ULM trials,” said Hemal Gada, M.D., of Pinnacle Health, Harrisburg, Pa.

Gada continued, “We have adopted the Sentinel System as the standard of care to protect our patients during every TAVR case, since the occurrence of embolic stroke is unpredictable, devastating and consequential to our patients, their caregivers and the healthcare community at large. Since the introduction of Sentinel in our center in July 2017, we have had significant improvement in neurologic outcomes.”

Gada led a presentation of clinical benefits of the Sentinel System at the February 13, 2018 Centers for Medicare and Medicaid Services (CMS) Town Hall meeting as part of the device’s approval process for gaining a New Technology Add-on Payment (NTAP) under the Medicare hospital inpatient prospective payment system (IPPS).

The company also announced that Stacy Enxing Seng, a 30-year medical technology leader, has joined the company’s board of directors. She is currently a venture partner with Lightstone Ventures and a member of the board of directors for a variety of public and private companies, including The Fogarty Institute for Innovation. Enxing Seng’s experience includes leading Covidien’s vascular division and ev3, as well as a variety of management roles with Boston Scientific, SCIMED Life Systems, Baxter Healthcare and American Hospital Supply.

Sentinel is the first and only FDA-cleared device that captures and removes debris that is dislodged ubiquitously during TAVR before it can travel to the brain and potentially cause neurological and neurocognitive damage, regardless of the TAVR system used or a patient’s risk profile. The SENTINEL IDE trial demonstrated that protected TAVR with the Sentinel results in a greater than 60 percent reduction in the occurrence of periprocedural strokes.

Watch a video on physician perspectives on the 5,000th patient treated with the Sentinel Cerebral Protection System