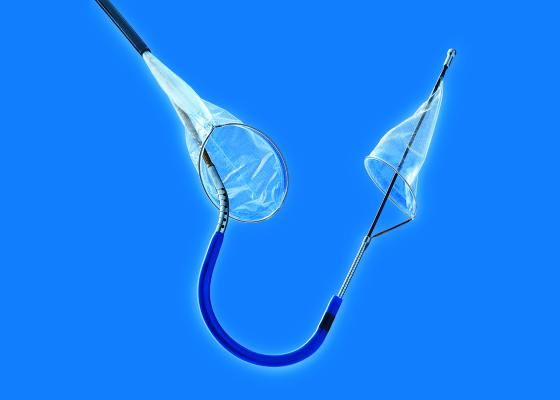 September 18, 2017 – Claret Medical announced publication of a new study in the Journal of the American College of Cardiology (JACC): Cardiovascular Interventions that underscores the role of the Sentinel Cerebral Protection System (CPS) in significantly reducing the early occurrence of stroke associated with transcatheter aortic valve replacement (TAVR). The study also shows, for the first time, a significantly lower mortality rate associated with use of the Sentinel CPS device.

The Sentinel is the first and only U.S. Food and Drug Administration (FDA)-cleared device that captures and removes debris that is dislodged ubiquitously during TAVR before it can travel to the brain and potentially cause neurological and neurocognitive damage.

According to the authors, “In patients undergoing TAVR, use of (the Sentinel) cerebral embolic protection device demonstrated a significantly higher rate of stroke-free survival compared with unprotected TAVR…In addition, there are no safety issues with use of the protection device…Hence, cerebral embolic protection should become standard of care for the TAVR procedure, as there are no pre-procedural independent predictors identified for selection of patients at high risk for stroke.”

The large-scale, all-comers, real-world study was conducted at the University of Ulm, Germany and led by Prof. Jochen Wöhrle, M.D., FESC. Between 2014 and 2016, it prospectively enrolled 802 consecutive TAVR patients, 280 that were protected by the Sentinel and 522 that had unprotected TAVR. Propensity Score Matching (PSM) Analysis was utilized to reduce any potential bias in outcomes of the study. Two groups of matched patients, with 280 protected and 280 unprotected in each arm, were established. All patients were evaluated by a neurologist, with stroke defined according to VARC-2 standard criteria.

Sentinel-protected patients showed a three times lower rate of all-cause mortality or all-stroke at seven days — the primary endpoint — than patients who had unprotected TAVR (2.1 percent vs. 6.8 percent, p=0.01). This result translates into one stroke or death being avoided for every 21 TAVR patients protected with Sentinel, which is consistent with earlier published studies.

Independent of all other factors, the use of Sentinel was shown to be the strongest predictor in reducing the rate of all strokes in the first seven days post-TAVR by 70 percent (1.4 percent vs. 4.6 percent, p=0.03). These data corroborate the finding of 63 percent reduction in early TAVR strokes that was shown in the SENTINEL pivotal trial.

In an accompanying editorial, Samir Kapadia, M.D., with the Cleveland Clinic commented, “…Stroke risk with TAVR, although comparable to that with surgical (aortic valve replacement, or AVR), remains to be a serious complication of TAVR…that risk is still in the four to 10 percent range for all strokes, and two to three percent for major strokes. Although this risk is considered ‘acceptable’ when compared with the gold standard therapy of SAVR, the question remains whether such a risk is really acceptable to patients.”

He continued, “In the study from Ulm, systematic use of the Sentinel device resulted in a 1.4 percent stroke rate…if (TAVR) is performed without an emboli prevention strategy and the patient has a procedural stroke, one could argue that this adverse event could have been potentially prevented with the use of this device…With TAVR advancing to intermediate risk and younger patients, preventing cerebral ischemic events and protecting the brain from embolic burden is crucial...”

Importantly, there were no major adverse events associated with Sentinel use. Device placement success (both filters deployed) was achieved in 99.6 percent of cases, with no increase in contrast amount needed during the TAVR procedure when the Sentinel was used.