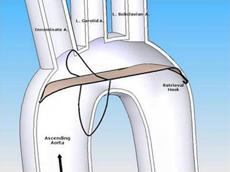 The goal of the collaboration is improved safety through reduction in the number of strokes and post-procedure brain lesions.

Post-procedure brain lesion formation has been reported in the literature to occur in 68 percent to 91 percent of TAVI procedures on MRI, and the incidence of symptomatic stroke following TAVI has been reported to be between 3 percent and 10 percent in most series. Anticipating this problem, SMT has spent five years developing and refining a deflection device specifically designed to reduce the chance of stroke and embolic events during TAVI and other structural heart procedures.

The company initiated a pilot clinical study in early 2010. Pieter Stella, M.D., of the University Medical Center in Utrecht, The Netherlands, has performed the first-in-man cases using the SMT device.

"TAVI is an exciting new procedure for patients and cardiologists," said Stella. "However, as with any new procedure, new risks arise. It is clear from the published studies in TAVI that embolic events do occur and need to be minimized. The SMT device is the first embolic protection device that I have seen that offers coverage of all three primary vessels feeding the brain. I have been pleased with our early results, and believe that the SMT deflector will help to ensure the continued market expansion for safe, effective TAVI procedures."

"We like the fact that the SMT device was designed from the perspective of a highly-experienced surgeon who understands the anatomy of the aortic arch and the variability of arteries that branch off to deliver blood to the brain and central nervous system," said OrbiMed principal and new SMT board member, David Bonita, M.D. "To our knowledge, this is the only device in development designed to protect the entire neurovascular system by covering all three major arteries feeding the brain – the innominate, the left common carotid and the left subclavian. SMT is also the only system designed for placement via one of two femoral artery access ports typically used in TAVI – unlike other approaches which require a third puncture located in the arm."

The SMT deflector device is an investigational device and is not available for commercial use in the United States, Europe or other markets of the world.