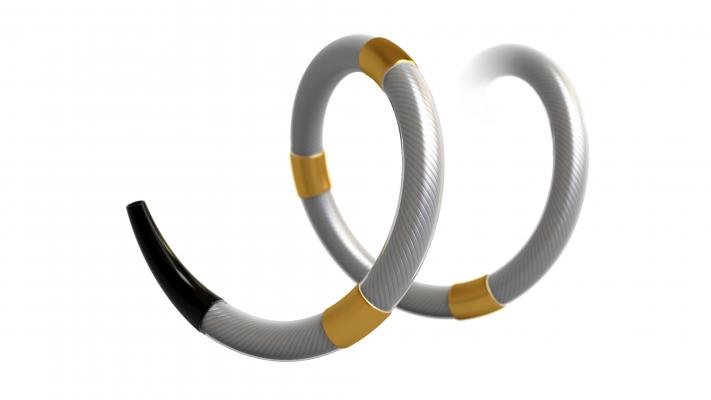 August 31, 2017 — Medtronic plc announced its intent to move forward with a new renal denervation pivotal trial following positive first results from a sham-controlled study in patients with high blood pressure. Investigators of the SPYRAL HTN-OFF MED Study found statistically significant and clinically important blood pressure reductions in the patients treated with renal denervation (RDN) across both office and ambulatory systolic and diastolic measurements. The data in the first 80 patients enrolled in the study at three months were presented in a late-breaking clinical trial session at the European Society of Cardiology (ESC) meeting, Aug. 26-30 in Barcelona, Spain and published simultaneously in The Lancet.

“Based on the clinical results presented at ESC, we are confident that the SPYRAL HTN-OFF MED Study has successfully demonstrated the treatment effect of RDN,” said co-principal investigator (PI) and presenter of the data at ESC, Prof. Michael Böhm, M.D., Ph.D., chairman, Department of Internal Medicine, University of Saarland in Homburg/Saar, Germany. “With consistent and significant drops across ambulatory and office-based blood pressure — including both systolic and diastolic measurements — we are confident to be moving forward with a pivotal trial so that doctors and patients may have an alternative approach to lowering blood pressure.”

“After SYMPLICITY HTN-3, we learned a lot about the procedure itself, medication adherence and which patients may have less response to the RDN procedure — these insights have been incorporated into the revised clinical approach in the SPYRAL HTN program,” said co-PI David Kandzari, M.D., director of interventional cardiology and chief scientific officer, Piedmont Heart Institute in Atlanta, Ga. “With this new approach and protocol design, coupled with new technology that allows more consistent circumferential treatment and easier access into the distal anatomy, based on these compelling results we are confident that we’ve appropriately addressed the issues in previous renal denervation trials.”

The SPYRAL HTN-OFF MED Study evaluated RDN in the absence of any antihypertensive medications compared to a sham-controlled population to isolate its effect on blood pressure reduction. The study enrolled 353 patients who were either drug-naïve or willing to discontinue medication for four months, with mild-to-moderate hypertension (OSBP equal to or more than 150 mm Hg and less than 180 mm Hg) at 24 centers in the U.S., Europe, Japan and Australia. Prior to randomization, patients were required to stop taking their antihypertensive medication during a period of three to four weeks, known as a medication washout. During the washout period and the three months following randomization, patients were monitored to ensure their blood pressure would not exceed 180mm Hg.

“These results are extremely encouraging for the more than 50 percent of hypertension patients who become non-adherent to their medications within one year of initiating therapy,” said co-PI Raymond Townsend, M.D., director of the hypertension program, University of Pennsylvania. “The societal implications are potentially huge as well, as high blood pressure contributes more than 500 billion dollars in direct costs to our healthcare systems globally.”

Unlike SYMPLICITY HTN-3, where patients self-reported adherence, and change in medications occurred among 40 percent of patients, the SPYRAL HTN-OFF MED Study limited that variability, as patients remained off their medication throughout the duration of the study as confirmed by serum and urine testing for antihypertensive medication. Additionally, the aftermath of SYMPLICITY HTN-3 revealed new anatomical insights showing that renal nerves are easier to access when the catheter treats the renal artery segments located close to the kidney. While SYMPLICITY HTN-3 only averaged five ablations in the main renal artery and no ablations in the branch arteries, the flexible design and low profile of the investigational Symplicity Spyral system achieved an average of 10 main renal artery and 13 branch artery ablations per kidney.

The Symplicity Spyral system is investigational in the United States and Japan.

Watch the VIDEO "Device Therapies to Treat Hypertension," an interview with Krishna Rocha-Singh, M.D., at TCT 2016.