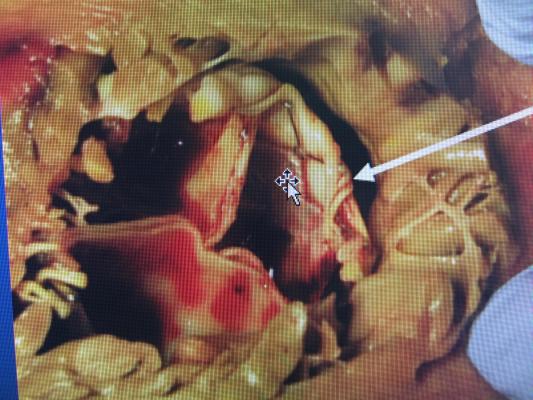 This image shows a left-ventricular outflow tract (LVOT) obstructed by an Edwards Sapien TAVR valve used for a valve-in-valve procedure. The arrow points to the small, crescent shaped dark area of the neo-LVOT, which did not allow enough blood to flow from the left ventricle into the aorta and the rest of the body. To prevent this issue, the procedure used by Henry Ford ablates (kills) some of the tissue in the cardiac septum to allow these valves to fit better and allow for an enlarged neo-LVOT for patients who otherwise could not receive this therapy.

July 3, 2019 — A study of a procedure developed at Henry Ford Health System shows inducing a heart attack in patients with heart disease could be a viable option for patients in need of mitral valve replacement.

William W. O’Neill, M.D., medical director of the Henry Ford Center for Structural Heart Disease, and Dee Dee Wang, M.D., director of structural heart imaging for the center, developed the procedure with a team of cardiologists to address an often-fatal issue in transcatheter mitral valve replacement (TMVR). The study was published July 1 in Journal of the American College of Cardiology: Cardiovascular Interventions.1

In some patients with smaller heart chamber anatomy, using a catheter to thread a new valve into their heart and deploying it causes their native valve leaflet to block the flow of blood. This problem, called left ventricular outflow track (LVOT) obstruction, is nearly always fatal.

“More than 50 percent of mitral valve patients are eliminated from TMVR trials due to LVOT obstruction,” O’Neill said. “So we were searching for a solution to save people’s lives. Inducing a ‘heart attack’ seems counterintuitive in cardiology. But this new procedure looks very promising.”

The team turned to alcohol septal ablation (ASA), a procedure used for the past 20 years to treat patients with thick, enlarged heart walls, or hypertrophic cardiomyopathy. Guided by high-definition, high-contrast ultrasound imaging done in real time, doctors performing ASA use a catheter to inject a tiny amount of alcohol into specific blood vessels feeding specific areas of the heart.

This process ‘kills’ the heart muscle in that targeted area, much like a naturally occurring heart attack when the vessels are blocked. The ensuing lack of blood to that area causes the muscle to lose mass and thin out. The thinning of certain areas of the heart allow it to function more efficiently, and often results in decrease of symptoms such as severe shortness of breath or angina.

When the same technique is used in the muscle near where the new mitral valve would be placed, the muscle thins, allowing more room for blood to flow after TMVR.

Key to the process has been imaging work by Wang, lead author of the study published. In landmark 2017 research that resulted in patented technology currently used during TMVR procedures, Wang established benchmark measurements of the LVOT opening that predict success or failure in TMVR.

The July 1 study involved 30 patients with small LVOT openings who received ASA at six medical centers in the United States. Eight of the patients felt better after ASA and did not need the TMVR procedure. Twenty patients originally rejected for TMVR received the new valve after ASA, and their conditions improved. Two patients died; one had complications from a pacemaker and the other suffered multi-organ failure post-procedure from advanced illness.

“Patients now have hope because this gives them a new option,” said Wang. “We can widen that heart chamber area, so the patient has large enough area to insert a new valve.”

Henry Kim, M.D., director of the Henry Ford Heart & Vascular Institute, said the procedure is the latest in many medical advances forged at the Center for Structural Heart Disease. “This is all part of our dedication to advancing the science of medicine,” said Kim. “Dr. O’Neill and the Center for Structural Heart Disease team was thinking outside the box again and applied that procedure to patients who have a lifesaving need. We’re grateful to support this work to help the sickest of patients.”

O’Neill performed the first transcatheter aortic valve replacement (TAVR) in the United States in 2005, and used an aortic valve to replace a mitral valve for the first time in the United States in 2013. He is one of 51 master fellows out of about 4,500 members in 70 nations of the Society for Cardiovascular Angiography and Interventions (SCAI), the largest group of interventional cardiologists in the world.

Read the article "Innovations in Cardiology at Henry Ford Hospital"