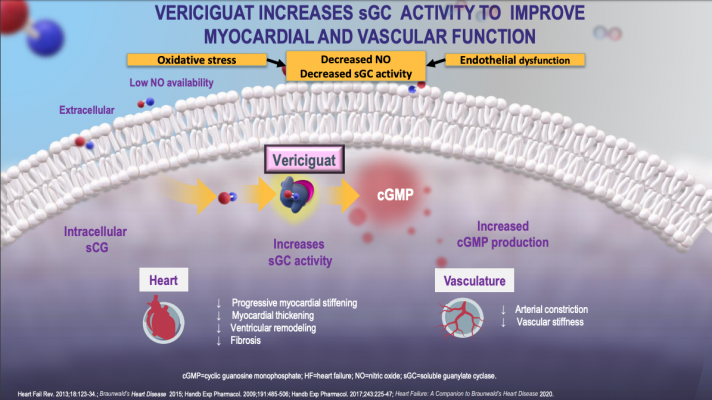 March 29, 2020 — Patients with worsening heart failure and reduced ejection fraction who received the investigational drug vericiguat had a significantly lower rate of cardiovascular death or heart failure hospitalization compared with those receiving a placebo, based on research presented at the American College of Cardiology’s Annual Scientific Session Together with World Congress of Cardiology (ACC.20/WCC).

About 6.5 million U.S. adults have heart failure, a debilitating condition in which the heart becomes too weak to pump enough blood to the body’s organs and tissues. Ejection fraction is a measure of the proportion of blood that is pumped out of the left ventricle with each heartbeat; a lower ejection fraction indicates a weaker heart. While treatments are available to manage heart failure symptoms, patients with reduced ejection fraction and a worsening condition — often marked by repeated visits to the hospital or need for intravenous diuretics — have limited options for stemming the disease’s progression.

Vericiguat is a novel drug — known as a guanylate cyclase stimulator — that is designed to enhance cyclic guanosine monophosphate production, which is a pathway that is critical for normal cardiac and vascular function but not currently targeted by existing heart failure drugs. While the drug has been tested in smaller groups of patients in phase II trials, the phase III VICTORIA (Vericiguat Global Study In Subjects With Heart Failure With Reduced Ejection Fraction) trial represents the first time vericiguat has been evaluated in a large group of patients with worsening heart failure receiving optimal standard of care treatments for their condition.

With a median follow-up period of 10.8 months, data showed patients randomized to receive vericiguat had a 10 percent lower rate of cardiovascular death or heart failure hospitalization —the study’s composite primary endpoint — than those taking a placebo. The difference favoring vericiguat appeared after about three months of treatment and persisted throughout the duration of the study. A secondary analysis revealed that those taking vericiguat had a significant reduction in heart failure hospitalizations and a possible reduction in cardiovascular death that was not statistically significant.

“For a group of patients with this form of high-risk heart failure, where other heart failure drugs have rarely been studied, vericiguat provides a significant novel addition to usual treatment,” said Paul W. Armstrong, M.D., cardiologist and distinguished university professor of medicine at the Canadian VIGOUR Centre, University of Alberta, and the study’s lead author. “I think it’s a gratifying result in high-risk heart failure patients that not only opens up a new avenue for them, but also a pathway for future discovery in cardiovascular heart disease.”

VICTORIA researchers enrolled 5,050 patients treated at 600 medical centers in 42 countries. Participants had heart failure with an average ejection fraction of 30 percent and markedly elevated natriuretic peptide levels, factors that indicate they were at high risk for hospitalization or death. In addition, all patients had been hospitalized within the last six months or required intravenous diuretics within three months, indicative of worsening disease. Half of the patients were assigned to take 10 milligrams of vericiguat once daily and half were assigned to take a placebo. All patients received standard heart failure treatment throughout the course of the study, including angiotensin converting enzyme inhibitors, angiotensin receptor blockers or angiotensin receptor-neprilysin inhibitors, combined with beta-blockers and mineralocorticoid antagonists. About a third of patients had either an implantable cardioverter-defibrillator, biventricular pacemaker or both devices.

“This is a sick population that has a significant unmet need. The results of our study translate into a clinically meaningful absolute reduction in the primary endpoint,” Armstrong said. “Because of the high rate of events [cardiovascular death or heart failure hospitalization] in this population, the absolute risk reduction of 4.2 per 100 patient-years means that you would need to treat about 24 patients for an average of one year in order to prevent one event.”

The effect of vericiguat on the primary outcome was consistent across most of the 13 prespecified subgroups (including those receiving sacubitril/valsartan), except in those defined by advanced age and very elevated levels of NT-proBNP, hormones that are associated with severe and worsening heart failure.

Because approximately half of all patients with heart failure have preserved ejection fraction, a different form of the disease for which there are even fewer treatment options available, Armstrong said that a separate study is underway to investigate whether vericiguat offers benefits for those with heart failure with preserved ejection fraction. He added that future studies could help elucidate how vericiguat may compare to or complement other emerging heart failure treatments to improve the outlook for the most severely ill patients.

Heart failure generally worsens over time and is a contributing factor in about 1 in 8 deaths annually. Patients commonly suffer shortness of breath, fatigue and swelling, along with other symptoms that interfere with everyday activities.

This study was simultaneously published online in the New England Journal of Medicine at the time of presentation. The study was funded by Bayer and Merck, developers of vericiguat, and conducted under a partnership between the Canadian VIGOUR Centre and Duke Clinical Research Institute.