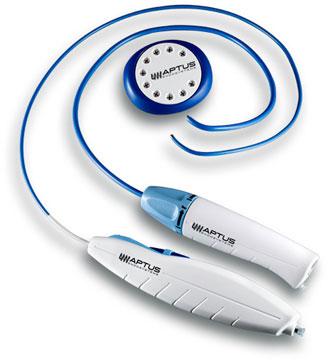 Aortic aneurysms are an enlarged and weakened section of the aorta, the main artery carrying blood from the heart, which can be lethal if left untreated. It is estimated that 60,000 people in the United States may have a TAA. In thoracic endovascular aneurysm repair (TEVAR), an alternative to open surgical repair of TAA, a minimally invasive catheter-based system is used to implant a metal and fabric endograft to isolate blood flow away from the aneurysm to prevent potential rupture and death. Complications can arise from TEVAR if the implanted endograft migrates (loses position) or does not result in a seal with the vessel wall (endoleak) to effectively isolate the aneurysm.

The new HeliFX System allows physicians to deliver Aptus’ novel EndoAnchor technology to the thoracic aortic anatomy. The implantable EndoAnchor enables independent endograft fixation, and is designed to replicate the sealing and fixation of hand suturing performed during open surgical repair of aortic aneurysms. It can be used during de novo (initial) TEVAR procedures to enhance an endograft’s inherent fixation and sealing mechanisms. In addition, the EndoAnchors can be used to repair endovascular grafts that have migrated away from the implant site and have developed endoleaks or are at risk of developing these complications. In such cases, augmented fixation and/or sealing is required to regain or maintain effective aneurysm exclusion.

“Complications from TEVAR such as endograft migration and endoleaks are even more critical in this patient population given the high surgical morbidity and mortality rates,” said Michael Dake, M.D., professor of cardiothoracic surgery at Stanford University School of Medicine, Stanford, Calif. “The HeliFX system offers physicians a new endovascular capability to improve fixation and sealing of TEVAR endografts and potentially improve procedural durability for patients.”

“The demonstrated capabilities of HeliFX for infrarenal EVAR in duplicating the strength of a hand-sutured aortic anastomosis will be even more valuable in the challenging environment of the thoracic aorta,” said David Deaton, M.D., associate professor of surgery and chief of vascular and endovascular surgery at Georgetown University Hospital, Washington, D.C. “The TAA HeliFX will allow surgeons greater control over the fixation and positioning of TEVAR devices and has promise for significantly reducing the susceptibility of TEVAR to the devastating consequences of late failure resulting from migration or aortic dilatation.”

“The FDA clearance of our new HeliFX System is a major milestone for Aptus and a significant technological advancement in the field of TEVAR,” said James Reinstein, CEO of Aptus Endosystems. “Given our initial success in helping AAA patients with our EndoAnchor technology, we are excited to provide patients with TAA a viable treatment option to address the potential problems associated with TEVAR.”

Clearance of the new HeliFX System in the United States allows the device to be used with Cook Medical’s Zenith TX2, W.L. Gore’s TAG, and Medtronic’s Talent Thoracic and Valiant endografts in both initial implant and secondary repair settings. Use with other endografts has not been evaluated to date.