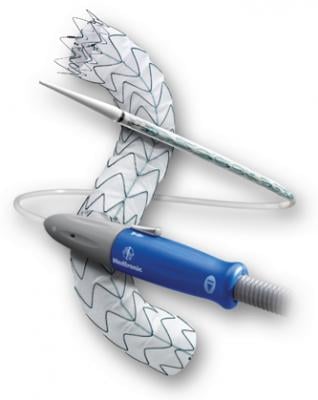 November 14, 2012 — Medtronic Inc. announced that the U.S. Food and Drug Administration (FDA) has approved the company’s Valiant Captivia stent graft system for the endovascular repair of isolated lesions (excluding dissections) of the descending segment of the thoracic aorta. This expanded indication includes the treatment of transections, commonly known as blunt traumatic aortic injuries.

The second leading cause of traumatic death after head injuries, transection of the thoracic aorta represents a dire medical emergency in which the upper area of the body’s main artery tears due to extreme force to the chest, usually the result of motor vehicle accidents, elevated falls or other high-impact deceleration episodes.

The Valiant stent graft, a tubular medical device consisting of a specially woven fabric sewn onto a flexible wire-mesh frame, can now be used in U.S. clinical practice to stabilize bleeding from descending thoracic aortic transections as an alternative to invasive surgery.

Previously approved by the FDA for the endovascular repair of aneurysms and penetrating ulcers of the descending thoracic aorta, the Valiant Captivia stent graft system has been widely available in the United States since May 2012.

The device is implanted in a minimally invasive procedure that uses a catheter inserted into the femoral artery, located in the groin. This technique requires only a small incision to access the aorta as opposed to larger incisions required for open surgery.

Compressed inside the delivery system, the device passes through several arteries in the abdomen and up the aorta to the location of the damaged area. By turning a mechanism on the handle of the delivery system, the stent graft flowers open from top to bottom, creating a new path for blood flow and reducing the risk of rupture, a complication that usually results in death.

The new indication for thoracic aortic transections follows the FDA’s review of the results of the RESCUE trial, which enrolled 50 patients across 20 U.S. and Canadian sites and met its primary endpoint with a 30-day all-cause mortality rate of 8 percent. Six-month results from the RESCUE trial will be presented later this week in New York to attendees of the VEITHsymposium, which began Wednesday.

“This new indication of the Valiant Captivia stent graft system reduces the morbidity and mortality rates associated with surgical repair of transected aortas,” said Rodney White, chief of vascular surgery at Harbor-UCLA Medical Center in Torrance, Calif., and principal investigator of the RESCUE trial. “When surgery is the only other option for repairing an aortic transection, the Valiant Captivia system can literally be a life saver.”

“Our vision is for endovascular repair to be applicable to more patients,” said Tony Semedo, vice president and general manager of Medtronic’s Endovascular Therapies business. “With this new indication for the Valiant Captivia system in the United States, that vision comes into sharper focus.”