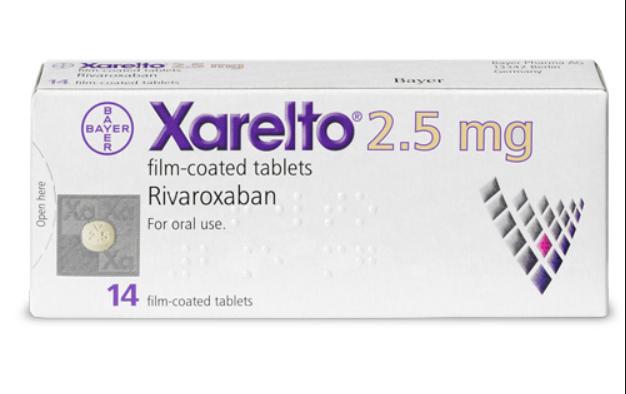 October 17, 2018 — The U.S. Food and Drug Administration (FDA) has cleared an additional indication for rivaroxaban (Xarelto) to reduce the risk of major cardiovascular (CV) events, such as CV death, myocardial infarction (MI) and stroke, in people with chronic coronary or peripheral artery disease (CAD/PAD). The drug is now the first and only factor Xa inhibitor approved for patients living with these conditions. The drug is made by The Janssen Pharmaceutical Companies of Johnson and Johnson.

“Treating patients with aspirin only is simply not enough to address the underlying thrombotic risk that comes with CAD and PAD,” said Kelley Branch, M.D., M.Sc., FACC, FSCCT, associate professor in cardiology, University of Washington, Seattle. “As we saw in the COMPASS Trial, the dual pathway approach of aspirin and the 2.5 mg, twice-daily dose of Xarelto can help significantly reduce the risk of CV events in these populations.”

Both chronic CAD and PAD occur when arteries become hardened or narrowed due to a buildup of cholesterol and plaque, potentially limiting blood flow to parts of the body. Known as atherosclerosis, this disease is rarely fatal, but is the most frequent underlying cause of CAD and PAD, which affect 16.5 million and 10 million Americans, 13 million of whom are currently diagnosed. When left untreated, atherosclerosis can lead to serious problems, including heart attack, stroke and death.[2,3]

“Despite the use of guideline-recommended therapies, patients with chronic CAD and/or PAD remain at risk of having a devastating and irreversible CV event,” said Paul Burton, M.D., Ph.D., FACC, vice president, medical affairs, internal medicine, Janssen Scientific Affairs LLC. “The new Xarelto vascular 2.5 mg dose, when used with aspirin, represents a true breakthrough for patients with chronic CAD and PAD.”

Details on the COMPASS Trial

COMPASS was a phase 3 clinical study of 27,395 patients with chronic CAD or PAD from 33 countries, examined the use of rivaroxaban, alone or in combination with aspirin, for the long-term prevention of major adverse CV events, including heart attack, stroke and CV death. In February 2017, COMPASS was stopped early for efficacy based on recommendation of the Independent Data and Safety Monitoring Board who observed a consistent difference in the primary outcome in favor of rivaroxaban 2.5 mg plus aspirin. The COMPASS results were presented during a Hot Line session at the ESC Congress 2017 and simultaneously published in The New England Journal of Medicine.[1] Two sub-analyses from COMPASS in patients with PAD and CAD were also published in The Lancet.

COMPASS is a part of the industry-leading EXPLORER clinical development program, a collaborative effort between Janssen and Bayer, which seeks to generate important clinical evidence on the safety and efficacy of rivaroxaban and its potential role in addressing a wide range of critical medical needs.

Read about the results of rivaroxaban in PAD from the late-breakers at ACC 2018.

In July 2018, Janssen’s development partner Bayer announced the Committee for Medicinal Products for Human Use (CHMP) of the European Medicines Agency (EMA) granted a positive opinion to update the rivaroxaban label to include the new vascular indication in the European Union; the European Commission granted approval on Aug. 24, 2018. Since its launch, rivaroxaban has been approved for a variety of indications and prescribed more than 45 million times worldwide.