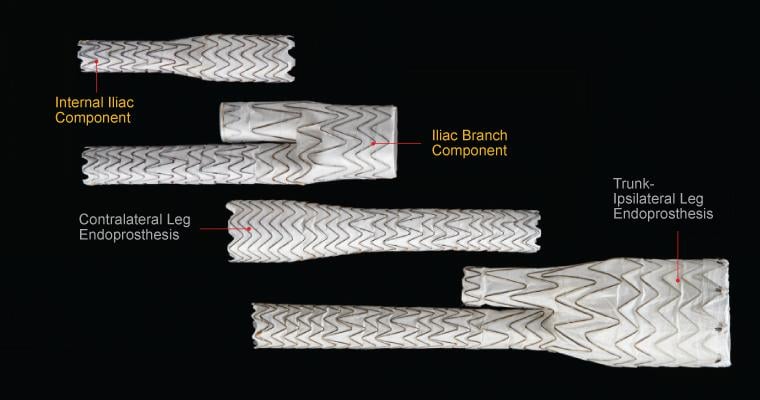 The device is a complete, fully engineered system (Gore-designed iliac branch and internal iliac components), which received CE Mark in 2013. The device is used in conjunction with the Gore Excluder AAA (abdominal aortic aneurysm) Endoprosthesis to isolate the common iliac artery from systemic blood flow and preserve blood flow in the external iliac and internal iliac arteries. The device is built on Gore’s technology platform and designed using the same durable, expanded polytetrafluoroethylene (ePTFE) graft and nitinol stent material.

The IBE offers an all-in-one system with improved outcomes for the treatment of iliac artery aneurysms while preserving flow to the iliac arteries, which is the recommended treatment by vascular surgery societies to sustain patient quality of life. Preservation of blood flow in the internal iliac arteries is found to avoid pelvic flow disruption and reduce the rate of buttock claudication, sexual dysfunction, and colonic ischemia.

“Historically, options to preserve flow to the internal iliac arteries during endovascular aneurysm repair were very limited despite the involvement of the iliac arteries in about 25 percent of AAA cases,” said Darren Schneider, M.D., chief of vascular and endovascular surgery and associate professor of surgery at Weill Cornell Medicine and principal investigator for the national Gore Excluder Iliac Branch Device Clinical Study. “However, through our research and the subsequent FDA approval, physicians now have a new therapeutic option to preserve pelvic perfusion in order to improve clinical outcomes and maintain patient quality of life.”

The Gore Eexcluder Iliac Branch Device Clinical Study — a prospective, multicenter, non-randomized, single-arm study designed to assess the safety and effectiveness of the IBE in treating common iliac artery aneurysms or aortoiliac aneurysms — completed enrollment in February 2015. A total of 62 patients received the device, which met the FDA required enrollment of 60 patients.  The trial also enrolled an additional 32 patients through continued access (as of Feb. 15, 2016), which expanded treatment options to allow for bilateral placement of the IBE in addition to unilateral IBE device placement, which was evaluated in the primary enrollment.