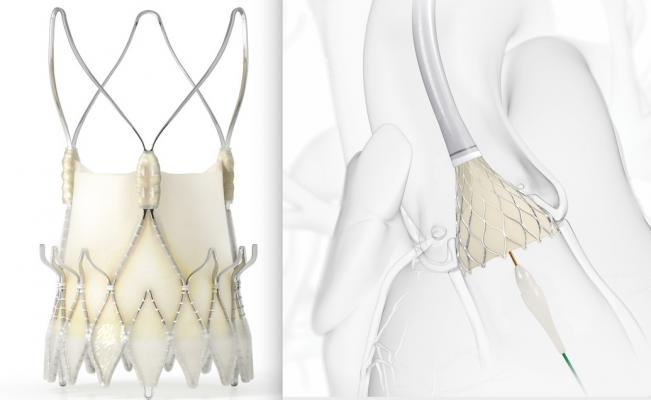 October 15, 2020 – The SCOPE II trial comparing the Boston Scientific Acurate neo vs. Medtronic CoreValve Evolut TAVR valves found the Acurate Neo failed to demonstrate non-inferiority compared to the existing self-expanding valve. This was the same negative result as the SCOPE I trial presented at TCT 2019, where a comparison with the Acurate Neo vs. Sapien also did not meet non-inferiority.[1]

“TAVR with the Acurate neo valve did not meet noninferiority compared with the CoreValve Evolut bioprosthesis with respect to a composite of death or stroke at one year,” said Corrado Tamburino, M.D., Ph.D., Division of Cardiology at Centro Alte Specialità e Trapianti (CAST) Policlinico - University of Catania, Catania, Italy. “In a secondary analysis with limited statistical power, cardiac death was increased at one year in patients who received the Acurate neo valve. The two valves also differed with respect to technical characteristics such as degree of aortic regurgitation and need for new permanent pacemaker implantation.”

The SCOPE II trial was designed to compare the clinical outcomes of the Boston Scientific Acurate neo and Medtronic CoreValve Evolut TAVR valves. A total of 796 patients aged 75 years or older with symptomatic severe aortic stenosis and an indication for transfemoral TAVR as agreed by the Heart Team were recruited at 23 tertiary heart valves centers in Denmark, France, Germany, Italy, Spain and the United Kingdom. Participants were randomly assigned (1:1) to receive treatment with the Acurate neo (n=398) or the CoreValve Evolut devices (n=398).

In the intention-to-treat analysis, death or stroke at one year was 15.8% in the Acurate neo group compared to 13.9% in the CoreValve Evolut group, while in the per-protocol analysis it was 15.3% vs. 14.3%. Non-inferiority of the Acurate neo was not met for the primary endpoint in the intent-to-treat analysis, while it was met in the per-protocol analysis. Based on the prespecified statistical plan, due to these inconsistent results, non-inferiority was not established for the primary endpoint.

A Second Negative Trial for the Acruate Neo TAVR Valve

Last year at TCT 2029, the SCOPE I Trial of the Acurate Neo versus the Edwards Lifesciences Sapien 3 in patients with severe aortic stenosis did not meet non-inferiority.

"The device was designed as a hybrid valve, blending the benefits of a self-expanding device with having specific annular contact with the aim of lowering pacemakers and stroke rates," explained Chandan Devireddy, M.D., cath lab director at Emory University Hospital Midtown, and a spokesman for the Society of Cardiovascular Angiography and Interventions (SCAI). "The data was not a happy story. It was designed as a non-inferiority trial, and it did not meet that. Instead it showed it was inferior against the Edwards Sapien valve."

He said the poorer outcomes were mainly driven by a higher rate of kidney injury, possibly from use of more contrast, and a high rate of paravalvular leak (PVL).

"Now we are in the third, if not the fourth, generation world of transcatheter devices. So that high a level of moderate PVL as seen in the Acurate Neo trial, it is a bitter pill to swallow. In 2019, the current generation of the Accurate Neo is not ready for prime time," Devireddy said.

He did note stroke rates were lower with the new device and that Boston Scientific has already developed a second generation device. The new version of the Accurate Neo valve has additional material at the base designed to reduce PVL.

Boston Scientific last fall said it hoped to overcome the shortcomings of the first generation device with the improved design in the new Acruate Neo2 valve. That valve just gained European CE mark approval in September 2020.